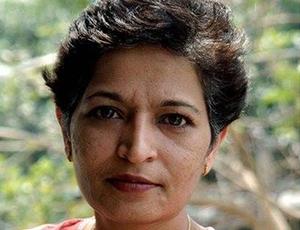 A prominent Indian journalist critical of Hindu nationalist politics has been shot dead in the south-western state of Karnataka, police say.

Gauri Lankesh, 55, was found lying in a pool of blood outside her home in the city of Bangalore.
She was shot in the head and chest by gunmen who arrived by motorcycle. The motive for the crime was not clear.
Indian journalists are being increasingly targeted by radical Hindu nationalists, activists say.
Gauri Lankesh, who edited a weekly newspaper, was known as a fearless and outspoken journalist.
She had returned home in her car on Tuesday night and was opening the gate when the attackers shot her, police said. She died on the spot.
Officials said they suspected she had been under surveillance by the gunmen. An investigation has been opened.
Her death has been widely condemned, with Karnataka state’s chief minister Siddaramaiah calling it an “assassination on democracy”.
Skip Twitter post by @CMofKarnataka
Report
End of Twitter post by @CMofKarnataka
Ms Lankesh came from a well-known family, and edited Lankesh Patrike, a newspaper founded by her father P Lankesh, a left-wing poet and writer.
She was the sister of award-winning filmmaker Kavitha Lankesh.

Who was Gauri Lankesh?
• Known for her secularist criticism of right-wing and Hindu nationalists, including members of the ruling Bharatiya Janata Party (BJP)
• Sympathetic to the Naxalites, or Maoist rebels, and was involved in the reintegration of former rebels
• Worked for The Times of India and later ran the newspaper Lankesh Patrike, which her father founded, with her brother Indrajit for several years
• She left to start several publications, including her own newspaper Gauri Lankesh Patrike

Ms Lankesh was convicted of defamation in 2016 for a report she published on local BJP leaders.
She was sentenced to six months in jail, and was out on bail and appealing the conviction at the time of her death.
In an interview with Narada News last year shortly after her conviction, she criticised BJP’s “fascist and communal politics” and added: “My Constitution teaches me to be a secular citizen, not communal. It is my right to fight against these communal elements.”
“I believe in democracy and freedom of expression, and hence, am open to criticism too. People are welcome to call me anti-BJP or anti-Modi, if they want to. They are free to have their own opinion, just as I am free to have my opinion.”
Her killing follows several assassinations of outspoken secularists or rationalists in recent years, including scholar Malleshappa Kalburgi, anti-superstition activist Narendra Dabholkar, and politician Govind Pansare.
Image copyright AFP Image caption Relatives of the journalist mourned her death
Noted writer K Marulasiddappa told the BBC: “The attack on the select writers is obviously happening because they are able to mould public opinion… there is a pattern in the way assailants come on motorbikes, kill, and vanish.”
“There cannot be any personal reasons attributed to her death because she had no personal enemies. So, the possibility is only political.”
The watchdog Reporters Without Borders said that radical nationalist journalists have targeted other writers, with online smear campaigns and threats of physical reprisals.
“With Hindu nationalists trying to purge all manifestations of ‘anti-national’ thought from the national debate, self-censorship is growing in the mainstream media,” the group said.
India ranked 136 out of 180 countries in the group’s 2017 World Press Freedom Index.