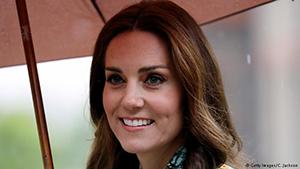 A French celebrity magazine has been ordered to pay 100,000 euros in damages for invasion of privacy. Photos of the topless Kate Middleton were taken with a long-focus lens while she sunbathed at a private estate.

A French court ruled on Tuesday that a French gossip magazine must pay damages and the maximum fines to Britain’s Prince William and his wife, Kate Middleton . The case centered on photos that were taken of the Duchess of Cambridge while on vacation in Provence in 2012.
The court ordered Closer Magazine’s owner and editor to each pay 45,000 euros ($53,000) in fines. The magazine itself was told to pay 100,000 euros in damages to the Duke and Duchess of Cambridge which was well below the 1.5 million euros in damages that were reportedly sought by the royal couple.
The images were reportedly taken with long-focus lenses while the couple were sunbathing on the patio of a private estate in the south of France. The images led to a furious reaction from the royal family in Britain, while several British newspapers rejected offers to buy the pictures.
Closer was the first to print the pictures on its cover and several other publications in Europe followed, including Chi in Italy and Ireland’s Daily Star.
The defense attorney argued that the grainy photos were “in the public interest” and portrayed a “positive image” of the royal family.
‘Painful’ reminders of Diana
The royals, who announced on Monday that they were expecting their third child, filed a criminal complaint for invasion of privacy. They also successfully obtained an injunction that blocks the further use of the images.
In a letter read aloud in court, William said the case reminded him of how the paparazzi hounded his mother, Princess Diana. In his statement to the court, William wrote that the publication of the topless photos was “shocking” and painful.”
Diana was killed in a high-speed car crash in Paris as her driver attempted to evade paparazzi photographers. The 20th anniversary of her death was marked last Thursday with well-wishers laying flowers and candles outside Kensington Palace in London.