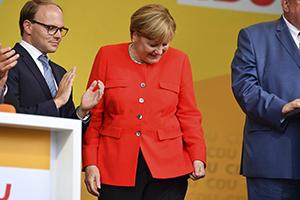 By Patrick Donahue and Naomi Kresge
German Chancellor Angela Merkel offered tips on how to deal with “alpha male” leaders such as President Donald Trump through cool preparation, hours after she was grazed by a tomato at a rally disrupted by noisy protest.

Campaigning across southwestern Germany less than three weeks before the Sept. 24 election, Merkel juggled two contrasting appearances Tuesday — a rowdy campaign stop in the university city of Heidelberg that attracted fruit-tossing protesters and a packed auditorium later in the evening in Stuttgart, where she weighed in on global leadership.
Appearing unruffled in the same red blazer she wore at the rally, Merkel was asked at the later event how she handled leaders such as Trump, Russian President Vladimir Putin and Turkish President Recep Tayyip Erdogan, who were identified by the on-stage moderator as “alpha males.”
“For me it’s always been important, and I won’t deviate from this, that I try to be as I am, and that I’m well prepared for the substance,” Merkel responded. “Such meetings are not about building a friendship. If that happens, good, but it’s about representing the interests of your country, and to make your values clear.”
Merkel, who projects herself as a force for stability in a world buffeted by turmoil, has maintained a dominant lead in the polls over Social Democratic challenger Martin Schulz. Her sober response about representing Germany’s interests echoes previous queries she’s fielded about her relationship with Trump, who has lambasted Germany over trade, migration and defense spending.
Rallies Disrupted
Seeking a fourth term as chancellor, Merkel’s campaign appearances have been punctuated by outbursts from right-wing protesters, many of whom have assailed her open-border response to an influx of more than 1 million refugees. At the Heidelberg appearance, demonstrators jeered and blew whistles, calling Merkel a “liar” and “betrayer of her people,” according to Deutsche Presse-Agentur.
Angela Merkel’s election opponent, Martin Schulz, failed to score a decisive breakthrough in their TV debate Sunday.
Merkel was hit on the left hip by bits of a tomato, spurring a police investigation, DPA reported. Two tomatoes were thrown, one splattering a moderator identified as Claudia von Brauchitsch, the news agency said. Merkel appeared unfazed and offered von Brauchitsch a tissue.
Asked about her best quality by an audience member in Stuttgart, Merkel cited her coolness as a virtue without mentioning the tomato incident.
“I would say that in decisive moments I can remain calm — and that calm is a strength, which is important to me,” she said at the event, hosted by two city newspapers, Stuttgarter Zeitung and Stuttgarter Nachrichten.
As for her weakness, Merkel said she tends to chat too long into the night, “when it’s late — and then I can’t really go to bed.”