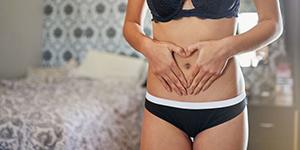 Four out of five women in the UK wouldn’t be able to name bloating as a symptom of ovarian cancer, according to Target Ovarian Cancer. Raising awareness of the signs of this deadly cancer is vital because the earlier the diagnosis the better the chances of a full recovery.
GP Dr Vicki Barber, a clinical advisor for the charity says:
“Our research shows that four out of five women in the UK cannot name one of the major symptoms of ovarian cancer: bloating. This is incredibly worrying.”
She explains that there are four main symptoms of ovarian cancer:
• Bloated tummy
• Always feeling full
• Tummy pain
• Needing to wee more
“If you experience any of these symptoms regularly and they are new to you it’s important to see your GP.”
Linda Drew, from Penarth, South Wales, had never heard of ovarian cancer and didn’t know the symptoms before she was diagnosed.
“I was experiencing some of the symptoms for a while but misdiagnosed for over 18 months, the GPs I saw suggested I had a UTI and irritable bowel syndrome, and when I paid privately to have a full ‘MOT’ with tests and checks, that didn’t pick it up either. When I was eventually diagnosed with ovarian cancer, my consultant was very shocked that I hadn’t been diagnosed earlier.
“I am now seven years clear of ovarian cancer. As the survival rate for ovarian cancer is so high when diagnosed and treated in the early stages, it’s absolutely crucial for woman and health professionals to know the symptoms. More awareness can save lives, that’s why I’m so passionate about raising awareness.”
Dr Barber says there are ways women can protect themselves:
1. Know the symptoms – get diagnosed earlier
“If you know your body and are symptoms savvy, you are more likely to go and get checked out by a doctor sooner. If ovarian cancer is diagnosed early, treatment can be easier and more successful. And when a woman is diagnosed at the earliest stage her chance of surviving ovarian cancer for five years or more doubles from just 46 per cent to more than 90 per cent.”
2. Feel confident to visit your GP if something is wrong
“Don’t be shy! The symptoms of ovarian cancer can be vague or confused with IBS. Being aware of what to look out for means you can talk to your GP about your worries as soon as you notice something – and keep a symptoms diary if you need to. Our 10 top tips for talking to your GP can help.”
3. Tell your friends and save lives
“Every day, 11 women die from ovarian cancer in the UK. Being aware of the symptoms, talking to a GP if you’re worried can all mean that women are diagnosed earlier, saving lives.”
Laura from East Sussex found out she had ovarian cancer after seeing a friend’s Facebook post:
“I first realised I could have cancer when I saw a post on Facebook. A friend had shared it. There was a list of symptoms and I was shocked to realise that I had them all.”