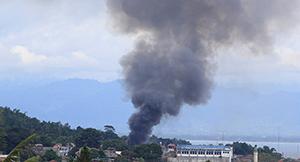 As government forces in the Philippines prepare for their final effort to liberate Marawi City from extremists, top military officials announced Tuesday that women and children fighting on the side of Maute-IS, a Daesh-linked extremist group, will be killed if they do not surrender.

Both Armed Forces Chief Eduardo Ano and Defense Secretary Delfin Lorenzana agreed that the militants, who they say now number less than 50, are running out of food and ammunition, and as such Marawi should be retaken “within the month.”
According to Ano, killing women and children fighters is necessary because “they’re shooting back and they are also inflicting injuries to our people,” the Manila Times reports.
Despite Maute’s small size and limited resources, neutralizing the group won’t be easy, the defense chief said, as “hardcore” leader Isnilon Hapilon will likely continue to fight as long as he possibly can.
“We don’t see that these people will surrender,” Ano said. “To their followers we appeal to them to surrender now because they will die there.”
The number of child soldiers that remain with Maute-IS isn’t clear, but Ano noted “our observers saw them. Actually, our soldiers were thinking twice if they will assault [them] or not. It could be that they are hostages who were given firearms, just like ‘scarecrows style.’ We have to be very selective – unless they start shooting us back, then we will [shoot them].”
There is evidence that boys as young as four years old have been recruited to fight for the jihadists, according to Al Jazeera.
“They will fight it out,” Ano added. “They say, let us be martyrs. We will set example to their comrades and the world that here in Marawi they are able to put up a good stand and they are martyrs to be idolized and worshipped and imitated by other recruits.”
Ano estimated that it would take about 50 billion Philippine pesos (more than $977 million) to rebuild Marawi City.
Lorenzana said that officials haven’t decided whether to bomb the mosque where Maute is hiding, but that Philippines President Rodrigo Duterte wanted commanders on the ground to make the final decision.
“We ask permission to the president,” Lorenzana said. “He does not want to bomb it. But he said if they are still putting up a strong fight and will not surrender and our troops will be put in danger, then I leave it to the ground commander to decide.”