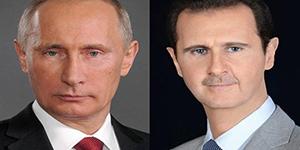 Moscow, SANA – President Bashar al-Assad on Tuesday received a cable from Russian President Vladimir Putin offering congratulations over the victory achieved by the Syrian Armed Forces in lifting the siege that had been imposed on Deir Ezzor city by ISIS terrorist organization for around three years.

In the cable, Putin affirmed readiness to continue providing active support for the Syrian Armed Forces in their war on terrorism.
The Russian President offered the sincerest congratulations to President al-Assad and the Syrian people over the strategic success achieved by the Syrian Arab Army which breached the siege imposed by ISIS on Deir Ezzor, as the army managed to advance swiftly and join Regiment 137 that had been besieged for 28 months.
Putin voiced hope that this operation will continue and that the Syrian Arab Army will fortify itself on the front lines it established control over, expanding the safe corridor and break the siege completely in the surroundings of Deir Ezzor Airport.
He affirmed that this achievement is an important step towards liberating Syria from terrorist groups, voicing certainty that joint efforts will lead to victory and restore peace and security to Syria.
Hazem Sabbagh