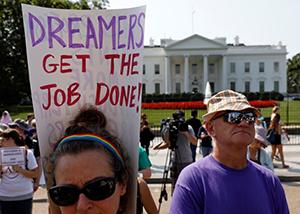 The White House claims that young undocumented workers are often criminals and a drag on the economy. Research indicates otherwise.
Derek Thompson

President Donald Trump has decided to end the Deferred Action for Childhood Arrivals program, or DACA, an executive action that protected from deportation more than 800,000 “Dreamers,” undocumented immigrants who came to the country as children.
In a statement, the president said that the Obama initiative led to a “massive surge [of] young people who would become members of violent gangs throughout our country.” Revoking DACA, he went on, was necessary to ensure “safe communities, a robust middle class, and economic fairness for all Americans.”
The president’s statement makes it sound like Dreamers are often violent members of society who, even when they’re not committing crimes, are busy stealing native-born Americans’ jobs and draining scarce government resources. The facts, however, paint a starkly different picture. There is little evidence to suggest that Dreamers are more violent than average Americans, and criminals were never eligible for protection under DACA anyway. Instead, there is considerable evidence that Dreamers are productive members of society.
The typical Dreamer is young and employed at a job that earns about $17 per hour, according to an analysis by the Cato Institute, a libertarian think tank. Dreamers pay taxes and are not eligible for federal welfare. As a result, far from being a drain on government, they are a boon. Cato estimates that ending DACA could cost Washington nearly $280 billion in lost tax revenue over the next decade.
Dreamers’ youth is an asset on its own, since the U.S., like most advanced economies, is beset by an aging population and a low natural birth rate. As the economist Paul Krugman points out, a slow-growing population hurts economic growth, exacerbating what economists fear might be long-term, or “secular” stagnation. This is a lesson that Europe and Japan have learned all too well after many years of lackluster GDP growth. “What would make secular stagnation more of a problem?” Krugman asks. “Hey, let’s expel hundreds of thousands of young people from the current and future work force.”
As a group, Dreamers over the age of 25 are more than twice as likely to start a new business than the national average, according to a survey from the left-leaning Center for American Progress (CAP). The same survey found that more than 90 percent of Dreamers over the age of 25 are currently employed, and, on average, they work 40 hours a week and earn an annual income of $37,000. More than 98 percent of them speak English, and more than 70 percent of them are pursuing (or have attained) a bachelor’s degree. Since the initiative was signed, these young people have increased their college enrollment, found better jobs, and earned more money.
This is the group that the president’s note has accused of being overrun by gang members and criminals. For an administration that has been accused of sympathizing with white supremacy, it may significant to point out that less than 2 percent of Dreamers self-identified as white in the CAP survey. More than 90 percent said their ethnicity was “Hispanic/Latino.”
Even discounting entirely the economics of immigration, there are other reasons not to destabilize the lives of nearly a million young, educated, working immigrants who were brought to the U.S. as children. The average age of a Dreamer arriving in the U.S. was under seven years old. It would be unreasonable to hold kindergarteners liable for violations of international migratory law. GOP Speaker of the House Paul Ryan has defended the Dreamers, saying “[t]hese are kids who know no other country, who were brought here by their parents and don’t know another home.” Many of them are now members of companies, communities, and families; one-quarter of them have children, who are legal U.S. citizens.
Attorney General Jeff Sessions said today that eliminating DACA was a “compassionate” move to uphold the rule of law and protect U.S. workers. A defense of the White House’s decision might hold that, by carving a hole into immigration law, DACA would encourage more undocumented workers to come into the country—that laws need to be enforced, and exempting people from them is arbitrary and sends a damaging message. But this is at odds with the fact that undocumented immigration has actually been declining for the last few years, even after the DACA initiative was signed.
It’s self-evident that this DACA decision will make Dreamers worse off. But the truth is that this decision, and similar immigration policies, make the entire country worse off, by punishing young law-abiding workers and discouraging future non-white immigrants from coming to the United States, for fear that they are not welcome under this administration. As a $17 trillion economy with a low native birth rate, the United States should be striving to be seen as a pro-immigration country. The politics of the country, however, are pushing in the other direction.