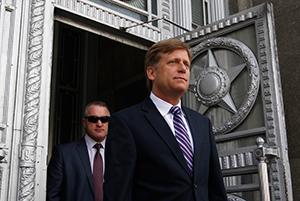 Michael McFaul, who served under President Obama, on being a diplomat in an often hostile environment
B.R.J. O’Donnell

The former U.S. ambassador to Russia Michael McFaul has long thought that getting the two countries to better understand one another could ease international tensions—a belief he’s held since the early 1980s, when he first visited what was then the Soviet Union. When he served as ambassador under Barack Obama from 2012 to 2014, he—unusually for a diplomat—kept a high profile, using social media to connect with people spread across a country that spans 11 time zones.
McFaul, who built an academic career at Stanford University before his ambassadorship, has received professional guidance from a patchwork of mentors, which he says has prepared him not only to serve as a diplomat in an environment that was often openly hostile, but for a career as an expert on U.S.-Russia relations outside government. He’s now back at Stanford, working as a professor of political science and the director of the university’s Institute for International Studies.
I spoke to McFaul for The Atlantic’s series on mentorship, “On The Shoulders Of Giants,” about how a conversation with Condoleezza Rice shaped his career and the kind of professional guidance that the uncertain life of a diplomat requires. The conversation that follows has been edited for length and clarity.

B.R.J. O’Donnell: What’s the most important professional guidance you’ve received?
Michael McFaul: Condi Rice, who was a colleague of mine here at Stanford—and obviously a former government official herself—convinced me that you cannot predict whether you are going to work in government, or for how long. Even if you do have a long career as a foreign-policy maker or analyst, as she has, you are still likely to spend most of your career outside of government.
So [her] advice to me was to think hard about developing an academic career at a university. That was extremely valuable advice, because I had opportunities to leave Stanford, and when I was younger, I was tempted. Now I am forever grateful that I have a tenured faculty position at a university that I absolutely love. I always look back to the conversation that I had with Condi as a young assistant professor when she said, “Play the long game.”
O’Donnell: A big part of your career has been focused on improving the relationship between the United States and Russia. What drew you to that work?
McFaul: My first trip abroad, in 1983, was to the Soviet Union. I had this theory back then—that if we just got to know these people better, that would help to reduce tension between our two countries. I have basically thought that ever since, and I think being dedicated to that proposition is one of the reasons that I became our ambassador to Russia.
O’Donnell: Some diplomats keep a very low profile, but you were very active on social media when you were posted in Moscow—and you still are. How do you think that fits in with your work?
McFaul: I was one of the first ambassadors to really use social media in an active way, on Twitter and other platforms as well, and I’m proud of that work, that we engaged not just with the Russian government, but with Russian society. Russia is a big country—you can’t travel to every city. Twitter gave me the ability to reach out to everyone from a high-school kid in Vladivostok, or an engineer in Novosibirsk, or a grandmother in Chechnya. I approached social media as a way to communicate information about the United States, and that was pretty difficult to get out on more-traditional platforms.
O’Donnell: What was the most important advice that you had in preparation for taking on your role as ambassador?
McFaul: I would often seek advice from Steve Sestanovich [a professor of international diplomacy at Columbia University who has served as a U.S. ambassador], especially when I worked at the White House. Steve’s advice was to define your career in terms of verbs—actions—not titles. I always thought about that.
O’Donnell: How have you put that advice into action?
McFaul: One of the most important things that I did in that vein happened when the Russians banned adoptions of Russian children by American families. I thought it was a horrible decision that Putin made. He divided families that were already bonding. His decision impacted Americans who had already met their children. Through some creative diplomacy, we managed to get a number of those children out of Russia, and that was deeply rewarding work.
O’Donnell: You had already lived in Russia for more than five years before you became the U.S. ambassador there. Was there anything that surprised you when you started your role?
McFaul: What was surprising and frustrating for me was that no matter what I said or did, we couldn’t change the cartoonish way that I was portrayed [in Russian media]—as a poster boy for supporting the opposition in Russia. And I did not expect that. Early on, I thought, “Surely we will be able to correct this misinformation,” and now that I have left, I would say it was impossible.