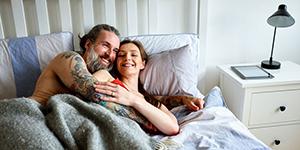 And it’s probably not what you think
By Becky Fletcher
Many assume that the majority of sexual fantasies tend to revolve around kinkier desires, but a new study reveals this might not be the case. According to research from the Indiana University School of Public Health, men and women desire the more affectionate kissing and cuddling over NSFW sexual behaviour.