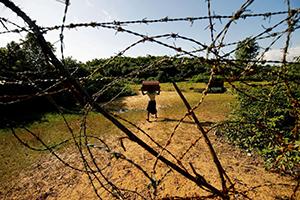 Wa Lone, Antoni Slodkowski
YANGON (Reuters) – When the former U.N. chief Kofi Annan wrapped up his year-long probe into Myanmar’s troubled northwest on Aug. 24, he publicly warned that an excessive army response to violence would only make a simmering conflict between Rohingya insurgents and Myanmar security forces worse.

INTERCEPTED MESSAGES
Despite the largely successful clamp down on information by the insurgents, it was a tip off by an informer that stopped the Aug. 25 attacks from being much worse for the Myanmar security services, the army source said.
About an hour after Ata Ullah’s men headed for the jungle in the evening of Aug. 25, the army received a signal from the Rohingya informer saying the attack was coming.
The 9 p.m. message mentioned imminent multiple attacks, but it did not say where they would occur. The warning was enough for the security forces to withdraw some troops to larger stations and to reinforce strategic locations, saving many lives on the government side, the military source said.
The raids by the insurgents came in waves from around 1 a.m. until sunrise, and took place mostly in Maungdaw township where Ata Ullah staged his three attacks in October. This time, though, the distance between the northern- and southern-most points was as long as 100 km (60 miles). The Rohingya also struck in the north of the neighboring Buthidaung township, including an audacious bid to storm an army base.
“We were surprised they attacked across such a wide geographical area – it shook the whole region,” said the army source.
Reporting by Wa Lone and Antoni Slodkowski; Editing by Alex Richardson and Martin Howell