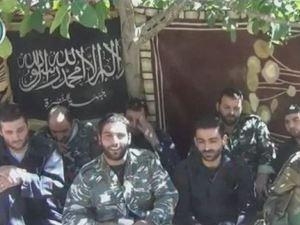 Lebanese army chief General Joseph Aoun on Wednesday informed relatives of servicemen slain by the Islamic State extremist organization that DNA tests have matched the remains of bodies retrieved last week from the outskirts of the northeastern town of Arsal.

Aoun held a closed-door meeting with the relatives at the Defense Ministry in the presence of Defense Minister Yaacouq al-Sarraf.

The results were supposed to be revealed in a press conference on Wednesday at 10 a.m. according to an Army Command statement. However they were instead revealed in a closed-meeting with families of the soldiers.

Lebanon will lay the army martyrs to rest on Friday.

The army leadership will hold an official national farewell day for the nine soldiers in the Ministry of Defense in the presence of state officials, reports have said.

President Michel Aoun, Lebanese Army chief General Joseph Aoun and relatives of the slain soldiers will deliver speeches on the occasion, as reported.

Funerals for the servicemen will be held each in his hometown.

Thirty servicemen were abducted by al-Nusra Front and the IS organization during clashes with the Lebanese army in the northeastern border town of Arsal in August 2014.

Sixteen held by the Nusra (Jabhat Fateh al-Islam) were freed in December 2015 through a Qatari-mediated deal that also included a prisoner swap to release a number of inmates from Lebanese jails.

The two groups had previously executed four of the hostages.

Nine servicemen remained in the IS captivity until their remains were retrieved during an army battle against the extremists on Lebanon’s eastern border.