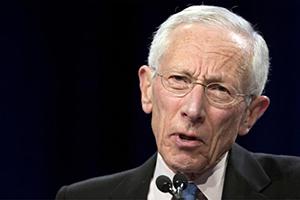 Reuters Staff
WASHINGTON (Reuters) – U.S. Federal Reserve Vice Chair Stanley Fischer, a veteran central banker who helped set the course for modern monetary policy, said on Wednesday he will step down from his position in mid-October, potentially accelerating President Donald Trump’s opportunity to reshape the direction of the central bank.

In a letter to Trump, Fischer, 73, said he was resigning for personal reasons effective on or around Oct. 13, eight months before his term as vice chair expires in June.
In the letter, Fischer said jobs growth had returned to the United States and that “steps to make the financial system stronger and more resilient” had been taken – actions that may now be weakened by the Trump administration.
His departure leaves the seven-person board of governors with as few as three sitting members, depending on whether and when the Senate confirms Trump nominee Randal Quarles to the role of vice chair for supervision, a job distinct from Fischer’s vice chairmanship.
The Senate Banking Committee is scheduled to vote on the nomination on Thursday.
The White House said it had no immediate comment on Fischer’s departure or on the timing for filling his spot or other positions at the Fed.
Though the Fed often operates with fewer than its full complement of seven governors, it has never dipped as low as three. Fischer’s earlier-than-expected departure intensifies the urgency for Trump to decide how deeply he wants to overhaul U.S. monetary policy.
Fed Chair Janet Yellen’s term expires in February. While Trump has spoken approvingly of her performance he has also kept the door open to naming his top economic adviser Gary Cohn, or someone else, to the job.
The sense of confusion over the Fed’s future leadership heightened with the controversy surrounding Trump’s response to a white supremacist gathering in Charlottesville last month, as pressure mounted on Cohn, who is Jewish, to respond.
Yellen and Fischer are also Jewish, and Fischer served as governor of the Bank of Israel from 2005 to 2013 before joining the Fed. In the closing days of his presidential campaign, Trump ran out an advertisement featuring Yellen and other prominent Jewish financial figures that was criticized for its anti-Semitic overtones.
“This will certainly leave us all scrambling to understand the new calculus of the Board,” said Carl Tannenbaum, chief economist at Northern Trust in Chicago.
In the shorter term, Fischer’s departure in October may lower the likelihood of another Fed interest rate increase this year.
As some of his colleagues began wondering about a permanent downshift in global inflation and interest rates, Fischer maintained an underlying faith in the macroeconomic models – which he helped refine – that showed falling unemployment ultimately raising inflation and requiring higher interest rates in response.
“We generally saw him as a centrist on the Committee,” said JPMorgan economist Michael Feroli. “At the margin his absence may lower slightly the odds of a December hike.”
The drop in board membership to three should not impact the Fed’s workflow despite what Tannenbaum called the “lack of bench strength.”
A SMALLER BOARD
The Fed’s supervisory functions can be conducted with as few as two of the seven members, according to the board’s rules. The Fed’s rate-setting policy committee can also continue to meet, though with the five regional bank presidents on the committee in a majority.
The dollar fell against a basket of currencies after Fischer’s announcement.
Over his career Fischer, a native of Zambia, helped to shape modern economic theory as an academic, trained many of today’s top central bankers and put his ideas into practice in a series of jobs. He was chief economist at the World Bank, and first deputy managing director at the International Monetary Fund during the Asian financial crisis.
He was also a vice chairman at Citigroup from 2002 to 2005 before taking over as governor of the Bank of Israel.
Reporting by Lindsay Dunsmuir and Howard Schneider; Additional reporting by Jonathan Spicer in New York and Ann Saphir in San Francisco; Editing by Chizu Nomiyama and Andrea Ricci