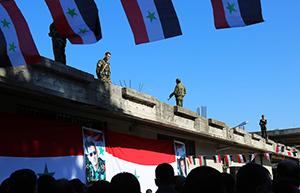 Laila Bassam, Angus McDowall
BEIRUT (Reuters) – The Syrian army and its allies are fighting to secure a corridor to troops in Deir al-Zor, a day after they smashed through Islamic State lines to break the jihadist siege.

The army reached Deir al-Zor city on Tuesday in a days-long thrust that followed months of steady advances east across the desert, breaking a siege that had lasted three years.
Islamic State counter-attacks lasted through the day, trying to repel the army, the Syrian Observatory for Human Rights said. Fierce battles raged around the city, as troops sought to expand the route and allow aid in, the British-based war monitor added.
“Work is progressing to secure the route and widen the flanks so as not to be cut or targeted by (Islamic State),” said a commander in the military alliance backing Syrian President Bashar al-Assad.
“The next step is to liberate the city,” the non-Syrian commander said.
It points to a tough battle ahead as the army aims to move from breaching the siege to driving Islamic State militants from their half of the city, the sort of street-by-street warfare in which they excel.
Syrian state news agency SANA said the army had made gains expanding its control near the corridor after heavy artillery and air strikes.
Assad and his allies – Russia, Iran and Shi‘ite militias including Hezbollah – will follow the relief of Deir al-Zor with an offensive along the Euphrates valley, the commander said.
The Euphrates valley cuts a lush, populous swathe of green about 260 km (160 miles) long and 10 km (6 miles) wide through the Syrian desert from Raqqa to the Iraqi border at al-Bukamal.
The area has been an Islamic State stronghold in Syria but came under attack this year when a U.S.-backed alliance of Kurdish and Arab militias besieged and assaulted Raqqa.
Rapidly losing territory in Syria and Iraq, Islamic State is falling back on the Euphrates towns downstream of Deir al-Zor, including al-Mayadin and al-Bukamal, where many expect it to make a last stand.
Still, the jihadist group specializes in urban combat, using car bombs, mines, tunnels and drones, and has held out against full-scale attack for months in some towns and cities.
Islamic State has 6,000-8,000 fighters left in Syria, despite losing most of its territory across both Iraq and Syria since September 2014, the United States-led coalition said.
FOOD CONVOYS
Parallel with their thrust toward Deir al-Zor, the Syrian military and its allies have been fighting Islamic State in its last pocket of ground in central Syria, near the town of al-Salamiya on the Homs-Aleppo highway.
On Wednesday, army advances gained control of four villages there, further tightening the pocket, a military media unit run by Lebanon’s Hezbollah said.
In Raqqa, the U.S.-backed Syrian Democratic Forces alliance says it has taken about 65 percent of Islamic State’s former self-declared Syrian capital.
Deir al-Zor lies along the southwest bank of the Euphrates. The government enclave includes the northern half of the city and the Brigade 137 military base to the west.
The army also holds an air base and nearby streets, separated from the rest of the enclave by hundreds of meters of IS-held ground and still cut off from the advancing army.
Government forces will push toward the besieged airbase, the pro-Assad commander said.
Instead of breaking the siege along the main road from Palmyra, stretches of which remain in Islamic State hands, the army reached the Brigade 137 along a narrow salient from the northwest.
The corridor from the west into Brigade 137 was only about 500 meters (yards) wide, the commander said.
The United Nations has estimated that 93,000 civilians were living under IS siege in Deir al-Zor in “extremely difficult” conditions, with some high-altitude air drops supplying them.
Deir al-Zor’s provincial governor told state-run television that convoys loaded with food and medicine were on the way, along with ambulances and a mobile clinic. Residents in the enclave had gone years without vegetables, fuel, and other necessities, Mohammed Ibrahim Samra said.
“Despite all this, the schools kept running,” he said. “Our people in Deir al-Zor have suffered a lot … and they still held on to their land.”
Writing by Angus McDowall; Editing by Angus MacSwan and Alison Williams