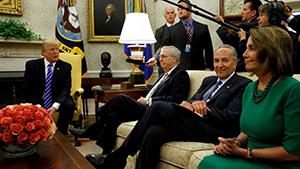 Steve Holland, Richard Cowan
WASHINGTON (Reuters) – When President Donald Trump spoke to reporters on Air Force One on Wednesday, he went out of his way to praise Democratic congressional leaders he had met earlier at the White House. He failed to mention Mitch McConnell or Paul Ryan, the two leaders of his own Republican party who also took part.

It could have been a snub or mere oversight – the White House did not say immediately – but in the context of recent events, it was a reminder of Trump’s lingering frustration with Republicans who control Congress, even as he takes his first steps with Democrats to break a congressional gridlock.
Trump, who has branded Democrats as obstructionists, on Wednesday embraced a proposal from Senate Democratic leader Chuck Schumer and his counterpart in the House of Representatives, Nancy Pelosi, for a three-month extension of the U.S. debt ceiling, rejecting a Republican plan for a longer extension.
By contrast, at a meeting on Tuesday with McConnell, the Senate majority leader, and Ryan, speaker of the House of Representatives, both fellow Republicans, there was little personal interaction in the presence of reporters.
A close Trump associate said that Trump, a 71-year-old brash former reality TV star who had never held public office before he entered the White House in January, had yet to comprehend the need to improve his relationship with McConnell, a 75-year-old dour legislative tactician with more than 30 years in the U.S. Senate.
His legislative priorities hanging in the balance, Trump is under pressure to improve ties with McConnell and salvage what he can of an increasingly jeopardized agenda that includes a healthcare overhaul, immigration, infrastructure and tax reform.
“You want to go blow up the majority leader, that’s your prerogative, but it doesn’t get your agenda done. If you want to get things done, you have to make nice to him,” the source said.
A senior White House official said on Wednesday that Trump and McConnell had a “great working relationship” and the president respected his grasp of Senate rules and procedures. But aides say Trump privately has expressed annoyance at the slow pace of legislative action on his priorities and blames his own party, especially McConnell, for the failure.
‘SHOULD BE TRUMP‘S BIGGEST ASSET’
A Republican close to the White House said what Trump “doesn’t understand is he needs Mitch McConnell more than anyone else in this town, because he runs the Senate and sets the agenda.”
“McConnell is a master of the Senate and he could and should be Trump’s biggest asset,” the Republican said.
Trump spent part of recent months feuding with McConnell. After a healthcare overhaul effort collapsed in the Senate in July, Trump and McConnell traded accusations.
McConnell said in his home state of Kentucky that Trump had “excessive expectations” of how much could get through Congress in a short period of time and suggested Trump was inexperienced.
Clearly annoyed, Trump questioned McConnell’s competence.
“Senator Mitch McConnell said I had ‘excessive expectations,’ but I don’t think so. After 7 years of hearing Repeal & Replace, why not done?” Trump tweeted.
A source familiar with Trump’s thinking said the president had a lot of respect for McConnell. “He just doesn’t like to be criticized and he viewed McConnell’s comments as demeaning,” the source said.
An associate of McConnell said McConnell considered the usual drama surrounding Trump to be “totally irrelevant” to doing business with him and that from a “practical standpoint” all McConnell wanted to do was get work done.
“He’s pretty drama free,” said the associate. “I have yet to encounter a single situation where he allows his personal feeling or animosity or any kind of emotional response affect the way he does business.”
McConnell, whose wife, Elaine Chao, is Trump’s transportation secretary, has said he has no hard feelings after Trump’s criticism of him.
“We have a lot of work ahead of us, and we are committed to advancing our shared agenda together and anyone who suggests otherwise is clearly not part of the conversation,” McConnell had said.
Additional reporting by Jeff Mason and Roberta Rampton; Editing by Howard Goller