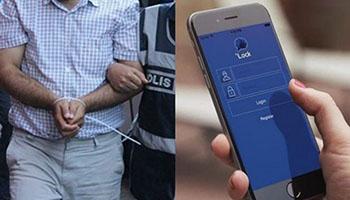 Detention warrants were issued on Tuesday for 112 former and current staff members of the İstanbul Metropolitan Municipality and 18 other district municipalities on accusations that they use a smart phone application known as ByLock, the state-run Anadolu news agency reported.

According to the report, police detained 35 of the 112 people in eight provinces as part of an investigation by the İstanbul Public Prosecutor’s Office into the Gülen movement, accused by the Turkish government of mounting a coup attempt last year. The movement strongly denies any involvement in the coup attempt.

Turkish authorities believe that ByLock is a communication tool among followers of the Gülen movement.

Tens of thousands of people, including civil servants, police officers, soldiers, businessmen and housemakers, have either been dismissed or arrested for using ByLock since the failed coup attempt on July 15, 2016.

A recent legal opinion published in London last month found that tens of thousands of Turkish citizens detained or dismissed from their jobs on the basis of downloading ByLock have had their human rights violated.

The Guardian reported on a study commissioned by opponents of Turkish President Recep Tayyip Erdogan and conducted by a pair of 2 Bedford Row attorneys which argues that the arrest of 75,000 suspects primarily because they downloaded the ByLock app was arbitrary and illegal.

According to the report by Guardian legal affairs correspondent Owen Bowcott, the legal opinion was commissioned by a pro-Gülen organization based in Europe. Two experienced British barristers, William Clegg QC and Simon Baker, drafted the opinion.

“The evidence that the [ByLock] app was used exclusively by those who were members or supporters of the Gülen movement [is] utterly unconvincing and unsupported by any evidence,” the two barristers said, according to the Guardian.

“There is a great deal of evidence … which demonstrates that the app was widely available and used in many different countries, some of which had no links to Turkey.”

The detention of people on this basis is “arbitrary and in breach of article 5” of the European Convention on Human Rights (ECHR), which guarantees the right to liberty, the report says.

The report examines transcripts of recent trials of Gülen followers in Turkey as well as Turkish intelligence reports on ByLock. It concludes that the cases presented so far violate the ECHR, to which Turkey is a party.

Most recently, Dutch cyber security firm Fox-IT, known for providing cyber security solutions to governments, said on Sept. 13 that it had debunked a report by Turkey’s National Intelligence Organization (MİT) on the ByLock smartphone application as it discovered inconsistencies and manipulations.

In a statement on it website, Fox-IT said the quality of the MİT report on ByLock is very low, especially when weighed against the legal consequences of the report, which is the basis of detention for 75,000 Turkish citizens, mainly sympathizers of the Gülen movement.