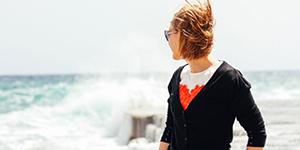 While anxiety is slowly shaking off its stigma, bipolar (or manic depression) is still rarely talked about. And considering 5% of us could be suffering – according to charity Bipolar UK – it’s a conversation we should all be having.

No surprise then that bipolar – which causes severe mood swings from massive highs to devastating lows – is often misunderstood.

That’s like asking someone if they “were cancer” or “are diabetes” – it makes out that everything about them is characterised by their illness – rather than who they really are.

Asking if they “have” bipolar, or waiting for them to open up about it is probably a better idea.

Lots of us suffer from bad days and mood swings, but bipolar is much more serious.

Bipolar UK says that mood swings between 4 and 6 on their mood scale of 0 (low) to 10 (high) is the norm for non-sufferers. Bipolar sufferers will often feel highs of around 8 and lows of below 3, right down to a suicidal depression of 0.

Controlling your mood isn’t easy when you suffer from bipolar.

On days of extreme highs, hypomania – where you swing from euphoria to sudden anger – or psychosis (losing touch with reality) are the norm. While, on down days, severe depression kicks in making sufferers feel worthless, exhausted and suicidal.

Yes, they famously suffer from bipolar – and it’s positive that they’re open about it – but every illness is different for different people.

“It is important to realise that everyone’s experience of bipolar is different”, says Bipolar UK. “Some people have more depressive episodes; others have more manic ones…The duration of an episode of mania or depression also differs from one person to the next, as does the severity of an episode”.

The short answer? Nothing. Very little is known about the cause, but there’s strong evidence that it’s due to changes in the brain that are impacted by the ups and downs of life rather than a moment or event.

Probably not the best thing to say to someone that suffers from mental illness full stop, but especially bipolar.

Most people know how to manage their mood through a combination of counselling, medication and regularly checking in with themselves.

There isn’t one cure. Many sufferers will have long periods of being ‘well’ before their symptoms reappear – and that’s seriously frustrating.

Unless you’re a very close friend or family member, this question will probably come across as pretty intrusive.

Most sufferers struggle with the knowledge that they have to take tablets everyday, so offering your support in whatever way they need – rather than questioning them – is probably a better idea.