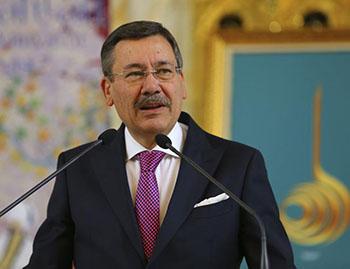 The resignation of Ankara Mayor Melih Gökçek is not on the agenda “at the moment,” President Recep Tayyip Erdoğan has said, without categorically denying the possibility in the future. Rumors about Gökçek’s resignation have heated up amid ongoing restructuring in the local administrations of the ruling Justice and Development Party (AKP).

“There is no such thing at the moment. But that does not mean it will not happen in the future,” Erdoğan told reporters on Oct. 3, commenting on reports that Gökçek was among the mayors expected to quit after the resignation of a number of other AKP mayors.

Erdoğan hinted that the recent resignations were part of the party’s preparations ahead of the 2019 elections.

“I hope we will prepare for the elections with a much livelier, more dynamic, stronger structure,” he said.

Prior to Erdoğan’s remarks, the AKP’s spokesperson rejected claims about the resignation of the long-time mayor of the Turkish capital.

“The media reports about the resignation of Ankara Mayor Melih Gökçek do not reflect the truth,” AKP Spokesman and Deputy Chair Mahir Ünal told reporters on Oct. 3.

Erdoğan has in recent months repeatedly said the ruling party is suffering from “metal fatigue” and needs substantial change. The mayors of Istanbul and Düzce have recently resigned and there is ongoing speculation about who will be next in line.

At the latest gathering of the AKP’s Central Decision Making and Executive Council (MKYK), members discussed the mayors who will leave their posts, party sources told daily Hürriyet.

At the meeting, Erdoğan told MKYK members that five more mayors would resign before the 2019 elections, according to the sources.

Istanbul Mayor Kadir Topbaş on Sept. 22 announced that he was stepping down from his post, which he had held for the past 13 years. The resignation followed disputes in the municipality administration, after Topbaş handed back five previously agreed zoning amendments on the grounds that they would damage the municipal council. The amendments were then approved once again without changes with the votes of AKP council members.

The son-in-law of Topbaş, Ömer Faruk Kavurmacı, had earlier been detained and then released on suspicion of business links to U.S.-based Islamic preacher Fethullah Gülen. The network of Gülen, AKP government’s former ally, is thought to be the mastermind of last year’s coup attempt.

Mehmet Keleş, the AKP mayor of the northern province of Düzce, also resigned on Oct. 2. Keleş’s son-in-law, Emre Kurt, was arrested in August over alleged links to the Gülen network.

Some 884 of Turkey’s 1,397 mayoralties are currently under AKP rule.

“We will review and update all our provincial organizations in cities, districts, and villages, because there is a fatigue that we must avoid. We have to get ready for the 2019 elections with more dynamic and hardworking teams,” Erdoğan had told his AKP lawmakers in his first address as the party’s chairman on May 30.