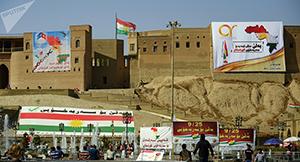 Iraqi Kurdistan’s independence vote may lead to an economic blockade from regional players and ethnic instability, analyst Hasan Abdullah told Radio Sputnik, adding that Turkey, Iran and Baghdad’s determination to thwart the Kurdish strive for sovereignty may convince Erbil to back off, while Israel’s support won’t help.

The Kurdish independence referendum is likely to trigger a domino effect in the Middle East and beyond leading to heightened instability, Hasan Abdullah, a political analyst and expert on Islam, told Radio Sputnik.

“The YPG [Kurdish People’s Protection Units] operating in northern Syria… has been trying to expand its territorial control [there],” said Abdullah, “If you want to go beyond this region, there are some other movements, for example the Baloch [separatist movement] in Pakistan and in Iran. They may find the developments [in Iraqi Kurdistan] encouraging and this may… provide them ‘a moral ground’… to pursue their own objectives.”

On Monday, Iraqi Kurdistan held a referendum with more than 90 percent of the more than three million eligible voters casting their ballots in favor of gaining independence from Iraq according to the Kurdish Rudaw broadcaster. In response, Baghdad has signaled that it would not hold talks with the Iraqi Kurds on the results of the vote, arguing that it was unconstitutional.

Iraqi Kurdistan’s pursuit of sovereignty has come under heavy criticism from regional players such as Iran and Turkey. For its part, Israel has endorsed the Kurdish initiative.

“The regional powers are very uncomfortable” with the vote, Abdullah pointed out, adding that it seems that the Kurdistan Regional Government (KRG) headed by Masoud Barzani may soon be “politically isolated.”

Ankara does not conceal “that it will take economic measures and even military measures” to thwart the Kurdish secession, the expert pointed out, adding that there had been “a high level meeting between military officials” from Baghdad, Ankara and Tehran on the matter.

On September 23, Turkey’s parliament voted to extend a mandate authorizing the deployment of Turkish troops in Iraq and Syria, two days before the Kurdish vote.

According to Abdullah, the parties concerned are ready to intervene to protect Iraq’s territorial integrity. However, there is still hope that the regional players can convince the KRG to “back off.”

The expert believes that “economic sanctions would probably be the first steps taken” and only then other options would be considered.

Thus, Turkish Prime Minister Binali Yildirim dropped a hint on Monday about possibly terminating oil transit from Iraqi Kurdistan to Turkey. “When the issue of national security is at stake, the economic loss of $300-500 million is not the problem,” the minister noted.

The real problem is that the landlocked region of Kurdistan exports its crude through a pipeline running to the Turkish port city of Ceyhan. By ‘clamping’ this artery Ankara may substantially undermine Iraqi Kurdistan’s oil industry — the major source of the autonomous region’s income.

After the Independence Vote Iraqi Kurdistan ‘Risks Finding Itself Isolated’

Abdullah highlighted that Iraqi Kurdistan risks finding itself “isolated” by regional players and “rejected by Turkey, that has [made] huge investments in the region.”

“Even closing the border gate between northern Iraq and Turkey” will deal “a huge blow” to the KRG, he stressed.

“As soon as we start imposing sanctions, close the oil valve, it will be the end. All income would cease. As soon as lorries stop going to northern Iraq, there will be nothing to eat there. How will Israel supply anything there? Please, it can try,” Erdogan said in a speech in Ankara.

What’s worse, the Kurdish pursuit of independence may stir turmoil and ethnic conflicts, Abdullah pointed out.

The expert called attention to the fact that prior to the vote there had been allegations from various ethnic groups inhabiting the region that “there was a deliberate change of demographics in the area” on the part of the Kurds.

“In the case of Kirkuk about 70 percent of the population had been Turkmen and then those demographics had been changed through resettlement,” Abdullah noted, adding that rumors emerged among ethnic minorities of the region about the alleged fraud during the independence vote.

“The chances certainly exist, there is friction and it could lead to a conflict,” the expert warned.

The independence vote took place on Monday in Iraqi Kurdistan as well as in the disputed areas officially controlled by Baghdad but de-facto remaining under the control of the Kurdish authorities.

The Kurds, who account for about 20 percent of the Iraqi population, have been seeking self-governance for decades. In 2005, Iraq’s Constitution recognized Kurdistan as an autonomous region run by the Kurdistan Regional Government.