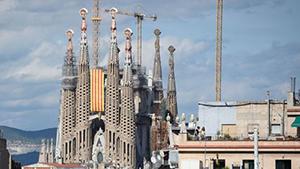 Will they or won’t they? The Catalan leader Carles Puigdemont has told the BBC the region will declare independence from Spain in a matter of days, following a controversial, illegal independence poll which Spanish police tried to stop. If they did, independence may well be blocked anyway. But supposing the region did secede, would Catalonia be able to stand on its own two feet?

To the casual observer, Catalonia looks like it has already got many of the trappings of a state. Flags. A parliament. The leader, Carles Puigdemont.

The region has its own police force, the Mossos d’Esquadra. It has its own broadcast regulator, and even boasts a series of foreign “missions” – mini embassies that promote trade and investment in Catalonia around the world. Catalonia delivers some public services already – schools and healthcare, for example.

There’d be much more to set up in the event of independence, though. Border control. Customs. Proper international relations. Defence. A central bank. Inland revenue. Air traffic control.

All of these are currently run by Madrid.

But assuming it did create these new institutions – would it be able to pay for them?

“Madrid nos roba” is a popular secessionist slogan – “Madrid is robbing us.” The received wisdom is that comparatively wealthy Catalonia pays in more than it gets out of the Spanish state.

Catalonia is certainly rich compared with other parts of Spain. It is home to just 16% of the Spanish population, but 19% of its GDP and more than a quarter of Spain’s foreign exports.

It punches above its weight in terms of tourism too – 18 million of Spain’s 75 million tourists chose Catalonia as their primary destination last year, easily the most visited region.

Tarragona has one of Europe’s largest chemical hubs.

Barcelona is one of the EU’s top 20 ports by weight of goods handled.

About a third of the working population has some form of tertiary education.

It’s also true that Catalans pay more in taxes than is spent on their region.

In 2014, the last year the Spanish government has figures for, Catalans paid nearly 10 billion euro more in taxes than reached their region in public spending. Would an independent Catalonia get the difference back?

Some have argued that even if Catalonia gained a tax boost from independence, that might get swallowed up by having to create new public institutions and run them without the same economies of scale.

And some argue that it makes sense for the state to redistribute money from richer to poorer regions in this way.

The Catalan government owes 77 billion euro at the last count, or 35.4% of Catalonia’s GDP. Of that, 52 billion euro is owed to the Spanish government.

In 2012, the Spanish government set up a special fund to provide cash to the regions, who were unable to borrow money on the international markets after the financial crisis. Catalonia has been by far the biggest beneficiary of this scheme, taking 67 billion euro since it began.

Not only would Catalonia lose access to that scheme, but it would raise the question of how much debt Catalonia would be willing to repay after independence.

That question would surely cast a shadow over any negotiations. And on top of the sum owed by the regional government – would Madrid expect Barcelona to shoulder a share of the Spanish national debt?

Why would independence negotiations matter?

Two-thirds of Catalonia’s foreign exports go to the EU. It would need to reapply to become a member if it seceded from Spain – it wouldn’t get in automatically or immediately.

And it would require all EU members to agree – including Spain.

Some in the pro-independence camp feel that Catalonia could settle for a Norwegian-style solution. Single market membership without joining the EU. Catalans may well be happy to pay for access, and continue to accept free movement of EU citizens across the region’s borders.

But if Spain chose to, it could make life difficult for an independent Catalonia.