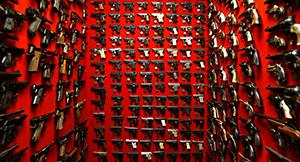 As its national three-month gun amnesty initiative draws to a close, Australia has collected more than 28,000 unregistered weapons.

Though totals are still being finalized, the current standings, according to Business Insider, show Tasmania with 1,924 relinquished weapons; Western Australia with 1,242; the Northern Territory with approximately 320; New South Wales with 14,446; Queensland with 7,000; Victoria with 2,150; South Australia with 1,338; and the Australian Capital Territory with 264.

The process, which began July 1 and concluded September 30, gave Australians the chance to surrender unregistered weapons without the fear of prosecution. However, for those who wanted to come clean about but keep their weapons, a chance to register guns was offered. Those wishing to register, however, were required to give a “genuine reason” to possess the firearm, Insider reported.

The outlet added that personal protection does not quality as a valid reason to obtain a gun.

“Thanks to the strong leadership of [former Prime Minister] John Howard more than 20 years ago, Australia has some of the strictest gun control laws in the world,” Prime Minister Malcolm Turnbull told reporters Tuesday. “And we remain ever vigilant to maintain them.”

The Land Down Under first held a national gun amnesty after the 1996 Port Arthur massacre in Tasmania that left 35 people dead and 23 others injured, the country’s deadliest mass shooting.

Following the 1996 killings, Australia’s government launched a 12-month buyback initiative that saw 650,000 weapons handed over. The incident also led to the ban on semi-automatic and fully automatic weapons, a statement from the country’s parliament stated in June, prior the start date of the most recent amnesty.

Talking on the success of the country’s second amnesty, Turnbull, speaking to the press on Tuesday, referenced the recent Las Vegas shooting to note the importance of keeping weapons “off the streets.”

“We’ve just had a gun amnesty over three months, and in the first two months over 25,000 guns were handed in,” Turnbull added. “So we will continue to do everything we can to keep guns, the kinds that were used by this killer in Las Vegas, off the streets.”

Australia’s individual states and territories have held 28 amnesties over the last 21 years since the Tasmania killing spree. Per Business Insider, a permanent amnesty is in place in Tasmania.

Though this amnesty is just the second national gun handover to occur, Australia also previously held a six-month national handgun buyback 14 years ago in response to the shooting at Monash University in October 2002.