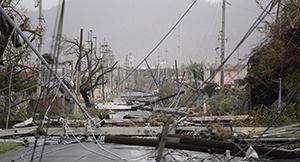 According to a spokesperson for Governor Ricardo Rosselló, the death toll in Puerto Rico after Hurricane Maria struck the island nation as a destructive Category 4 storm on September 20 has risen to 34.

Maria, deemed the worst hurricane to strike the Island of Enchantment in more than 90 years by Pedro Cerame, Rosselló’s director of communications in Washington, DC, killed 19 people directly, the official said.

US President Donald Trump visited the US territory Tuesday for the first time since Maria made landfall roughly two weeks ago. In his first briefing, Trump told Puerto Rican officials to “be very proud” that a “real disaster” had not hit the area, contrasting the island’s disaster with that of Hurricane Katrina. At the time, the commander-in-chief was referring to the previous certified death toll of 16.

“I hate to tell you, Puerto Rico, but you’ve thrown our budget a little out of whack because we spent a lot of money on Puerto Rico, and that’s fine, we saved a lot of lives,” POTUS told officials.

The majority of the island’s 3.5 million residents are still without power and access to potable water. Per reports from the New York Post, on the eve of Trump’s arrival, just a little more than 5 percent of the Puerto Rico’s electrical customers had service. An additional 10 percent could have their power restored, but it won’t be for another two weeks the outlet indicated.

According to Rosselló, Maria has caused about $90 billion in damages on the island.