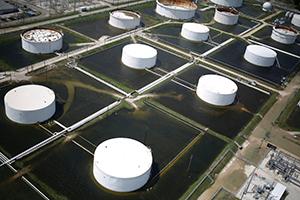 Higher oil prices would pose one of the biggest risks to Saudi Arabia’s efforts to overhaul its economy, according to Fitch Ratings.

The world’s biggest oil exporter is trying to reduce its dependence on oil revenue by implementing an economic and social reform plan called Vision 2030. Yet a surge in oil income might test the government’s commitment to change, James McCormack, global head of sovereign ratings at Fitch, said at an event in Riyadh to mark the opening of the firm’s first Saudi office.

When countries “kick-start reform programs when oil prices are low, sometimes the enthusiasm wanes when commodity prices move higher,” McCormack told reporters. “That is potentially a risk here. It will take continued focus on discipline to maintain many of those initiatives with higher oil prices.”

Oil capped the biggest monthly advance in September since April 2016 after entering a bull market on forecasts for rising demand. On Tuesday, it steadied near $50 a barrel.

The kingdom’s economy has shrunk for two quarters in a row this year as Crown Prince Mohammed bin Salman implements the plan, announced in 2016 to much fanfare. His blueprint includes selling shares in state giant Saudi Arabian Oil Co., privatizing a slew of other public institutions and creating the world’s largest sovereign wealth fund. But it also requires painful austerity measures, including subsidy cuts as the government tries to rein in a budget deficit that ballooned to nearly $100 billion in 2015.

The government has rolled back at least one measure so far, reversing cuts to the public-sector wage bill.

“That was a little concerning for us, to be honest,” McCormack said. “If things are actually rolled back after they’ve been announced, that would be more worrying in terms of the overall integrity of the initiatives.”

Still, he said, “the direction of change is clear.”

Fitch downgraded Saudi Arabia’s sovereign credit rating twice in the past two years and it currently stands at A+.

“We’re not anticipating further changes in the rating,” McCormack said. “The key factor that would move it in either direction is really the performance of public finances.”