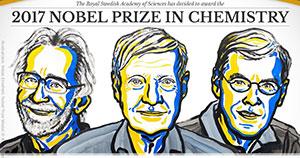 The 2017 Nobel Prize in Chemistry was awarded to Jacques Dubochet, Joachim Frank and Richard Henderson for the development of cryo-electron microscopy, which both simplifies and improves the imaging of biomolecules, the Nobel committee said.

The Academy said this method has moved biochemistry into a new era, and could prove crucial for many areas of research, including studying the Zika virus that causes brain damage in newborns. Using cryo-electron microscopy, researchers can freeze biomolecules mid-movement and visualise processes they have not previously seen.

Electron microscopes were long believed to only be suitable for imaging dead matter, because the powerful electron beam destroys biological material. But in 1990, Richard Henderson succeeded in using an electron microscope to generate a three-dimensional image of a protein at atomic resolution – a breakthrough that proved the technology’s potential. Joachim Frank made the technology generally applicable by developed an image processing method, while Jacques Dubochet added water to electron microscopy.

So far, all Nobel Prizes this year have gone to men. The Nobel Prize for Literature will be announced on Thursday, October 5.

Joachim Frank was born 1940 in Siegen, Germany. He got his PhD in 1970 from the Technical University of Munich, Germany, and is a Professor of Biochemistry and Molecular Biophysics and of Biological Sciences at New York’s Columbia University.

Richard Henderson was born 1945 in Edinburgh, Scotland. He got his PhD from Cambridge University in the UK in 1969. He is the Programme Leader at the MRC Laboratory of Molecular Biology in Cambridge.

The 2016 Nobel Prize in Chemistry was awarded to Jean-Pierre Sauvage, Sir J Fraser Stoddart and Bernard L Feringa for their work in developing and refining “molecular machines” – molecules “with controllable movements”. The Academy said the three researchers have “miniaturised machines and taken chemistry to a new dimension” 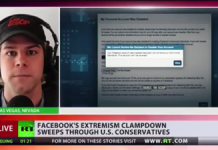 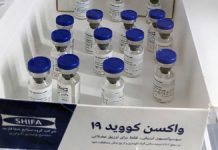