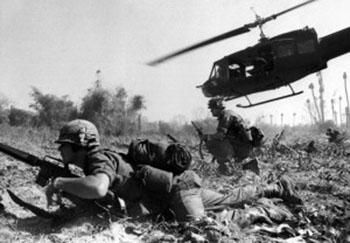 For decades, the U.S. mainstream media has shied away from a clear-eyed view of the Vietnam War, not wanting to offend the war’s apologists, a residue of which tainted the recent PBS series, as John Pilger told Dennis J Bernstein.

Ken Burns’s 18-hour documentary on the Vietnam War, which aired on PBS and BBC, presented extraordinary footage of the war’s grotesque brutality but also soft-pedaled the motivations of U.S. policymakers as well-meaning albeit misguided, or as the prologue put it, a conflict begun in “good faith by decent people out of fateful misunderstandings.”

This glossing over of U.S. neocolonialism and its deadly consequences angered John Pilger, who cut his journalistic teeth covering the Vietnam War for a decade. I spoke to Pilger after he watched the first couple of hours of the highly touted series.

Dennis Bernstein: I was reading your piece called “The Killing of History” and these lines stood out for me: “The revisionism never stops and the blood never dies. The invader is pitied and purged of guilt while ‘searching for some meaning in this terrible tragedy’.” What is your initial response to the framework of the film?

John Pilger: That quote, “searching for some meaning in this terrible tragedy,” is from Lynn Novick, who is Ken Burns’ collaborator on this series on the Vietnam War. If we don’t understand the meaning of the Vietnam War by now, I don’t know where our brains have been all these years.

Like so many colonial wars, it was an invasion based on a series of deceptions and lies. This is effectively denied in the Burns series. It starts off with the narrator saying that it was all conducted in good faith by decent people. It was all a big misunderstanding that grew out of the Cold War, and so on. That is complete nonsense.

The Vietnam War started specifically with the US arming the French to reclaim their colony in Indochina after the Second World War. It really got underway for the US with the Gulf of Tonkin incidents, following which Congress gave President Johnson the authority to start one of the longest bombing campaigns in the history of warfare, called “Rolling Thunder.” The long litany of official documents say it all.

But these filmmakers put aside all this demonstrable truth and obfuscate what really happened in Vietnam. The word “invasion” was never used by the press during the Vietnam War and it still isn’t being used. Instead that awful word “involved” is used. The United States was “involved” in Vietnam. It must be very difficult for truly decent Americans and especially veterans to watch. But it is very interesting, we get such a supply of special forces officers. Maybe we will see the drafted men later on. They were the truth-tellers, in my experience.

DB: You write in your piece The Killing of History: “The meaning of the Vietnam War is no different than the meaning of the genocidal campaign against the Native Americans, the colonial massacres in the Philippines, the atomic bombings of Japan, the leveling of every city in North Korea. The aim was described by Colonel Edward Lansdale, the CIA man who served as the model for the character in the Graham Greene story ‘The Quiet American.’ He said, ‘There is only one means of defeating an insurgent people who will not surrender, and that is extermination. There is only one way to control a territory that harbors resistance, and that is to turn it into a desert.’”

JP: This is the concept of total war, which the US adopted from Korea. The devastation of the Korean War, the millions killed, the new weapons, including napalm, that were used, the dikes that were bombed, costing countless lives. This was the model and it was during this time that the United States assumed its post-World War II imperial role. This concept of total war has been pursued in every colonial war that the US has been involved in since, either directly by the Americans or indirectly through proxies.

In Vietnam, for instance, they established “free fire zones.” You ringed an enormous area with heavy artillery, then you bombed it from above and then you strafed it, so that it would be a miracle if anyone survived. When I went to the province of Quang Ngai, where the massacre of My Lai took place in the late 1960’s, free fire zones had killed something like 50,000 people.

It happened also in neighboring Laos, the most bombed country in history. In southern Vietnam, since the end of the war, something like 40,000 people have died from unexploded ordnance, a great many of them children. We can go on forever talking in these terrible statistics.

You get some sense of that in this PBS series, the archive is really astonishing. But the way it is projected reminds me of the Newsweek cover that described the My Lai massacre as “an American tragedy.” You get a sense of the same thing in the Burns film. Yes, they interview Vietnamese, yes, you see terrible things happening, but the overall sense you are meant to come away with is that it was a great perplexing tragedy, a great blunder.

The whole thing was genocidal. The bombing of Cambodia between 1969 and 1975 was something like five times the equivalent of Hiroshima. According to one study that seemed to have credibility, something like 750,000 Cambodians were killed in that bombing. And that was simply a sideshow to the main event in Vietnam. Total war is a form of industrialized killing. The obsession in Vietnam was with body counts and we get no sense of that from the Burns film.

DB: There is a lot of discussion now of how dangerous Trump is, but if you look back at the Vietnam policy, Trump seems to fit right in.

JP: Trump’s specialty is abusing the world. But you’re right, he is just the latest on the team. In fact, he is a bit of a wimp in comparison with the ones who have come before. Obama was probably one of the most violent presidents in US history. He conducted a record of seven simultaneous wars, not to mention his assassination campaign.

This is not to say that Trump cannot get up in speed to equal this terrible record. But Trump should be understood as a symptom and a caricature of a violent, extremist system. Once you understand that, you can understand how the past has helped create the present. Trump is not an aberration, he is a caricature. Much more interesting is the way the suave Obama went about his violent presidency without due recognition.

JP: She said that when she was running against Obama. Well, Iran has 80 million people.

DB: She and Colonel Lansdale were talking the same language.

JP: Yes, and President Truman was talking the same language when he dropped two atomic bombs for reasons that had nothing to do with making the Japanese surrender. These were the first terrible explosions in the Cold War, aimed at intimidating the Soviet Union.

DB: What responsibility does the corporate media have for the US and world population not knowing the real story?

JP: They are the gatekeepers. People turn to the media for their information, to be able to make some sense of a difficult world. And they don’t get it. You will find that most of the exceptions are on the World Wide Web. That is where my article was published. It would not have been published in The Guardian, where I used to publish.

I don’t agree that everyone is wildly enthusiastic about Burns’ film. I think there has been a lot of critical response to the film as well. This is going to build, and I suppose he has done us a service in opening up the wound so that people who really experienced Vietnam can describe what happened.

DB: Burns also says he is grateful to “the entire Bank of America family.”

JP: The Bank of America was a corporate prop of the invasion that killed up to 4 million people. That is just corporate speak and it rather demeans a filmmaker to talk like that.