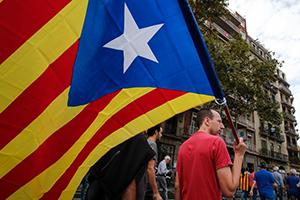 Referendums by the Catalans and the Kurds are expressions of free speech protected by each country’s constitution.

The secession of a region without constitutional authority is a big deal, as referendums in Catalonia and Kurdistan have shown in the last week. To get a sense of the possible consequences, think of the U.S. Civil War, which started precisely because Southern states insisted they could secede while Northern states pointed out that such a right was nowhere in the U.S. Constitution.

Yet it’s important to draw a line between actual attempted secession, which would violate the constitutions of Spain and Iraq, respectively, and nonbinding referendums intended to reveal public preferences. In a constitutional democracy, it should be permissible for citizens to express their political beliefs through the collective action of calling for secession and independence. A nonbinding referendum should be treated as free speech. An attempt at actual secession should be treated as rebellion.

Spain and Iraq, each in different ways, have failed to make this distinction.

The government of Spain, acting on judicial orders, sent national police to block the Catalans’ nonbinding referendum vote, sometimes with the use of force.

The government of Iraq is punishing the regional government of Kurdistan for its referendum with a flight blockade that substantially hampers its economy.

These retaliatory actions may seem necessary to the two national governments to assert their sovereignty. But that’s a mistake, in principle and in practice.

A constitutional democracy that is worth belonging to must respect its citizens’ self-expression. And the government that’s strong enough to tolerate substantial dissent is more likely in the long run to stay in one piece.

The right of self-expression is constitutionally guaranteed in Spain, where it’s ordinarily respected, and in Iraq, where basic constitutional rights don’t necessarily receive the same degree of reverence.

In a liberal democracy, a citizen must have the right to say that he thinks his part of the country should be independent. This is a classic expression of political belief — the core of the free expression right wherever it exists.

The right of groups of people to associate to make their voices heard collectively is a derivative of the free expression right. Free speech isn’t worth much if it’s restricted to individuals.

Calling for and carrying out a nonbinding referendum is precisely a way for groups of people to express their political will. Indeed, there is no comparably effective mechanism for expressing popular desire for independence. That’s because independence can only be justified if the large majority of people in a given area want it.

But actively prohibiting a nonbinding referendum or punishing it after the fact violate the free expression rights of the citizens who try to organize such a referendum.

Nation states that are worried about unconstitutional secession tend to fear that public manifestation of support will make secession more likely. That’s potentially true, of course. The reason to stage the referendum is to increase the likelihood of supporters’ preferred outcome.

Yet there is another way of seeing the situation. A national government that is confident in its capacity to maintain unity would be much more willing to allow a referendum suggesting secession. Allowing such a referendum sends a powerful signal that, no matter what the minority what might want, the state’s constitution will be upheld and secession will not be permitted without amendment.

The signal of confidence shouldn’t be underestimated as a tool for states to stay together. The states that fall apart — and often fall into civil war — are typically weak states, where the national government arguably lacks the capacity to hold them together. In contrast, strong states are able to resist the threat of secession. Of course, before secession, no one knows with certainty how strong the state really is.

Finally, there is the question of political morality. What kind of constitutional state merits allegiance? One that respects basic rights, including free speech and free association.

Neither Spain nor Iraq has done itself any favors with its reactions to the referendums. The lesson for other countries in similar situations is to take free speech seriously — and earn citizens’ loyalty by respecting their rights.