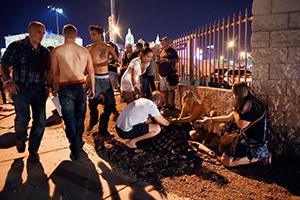 US President Donald Trump has ruled out a political debate on gun control in the wake of the mass shooting in Las Vegas that left 59 dead and more than 500 others injured.

Asked during his return from touring hurricane damage in Puerto Rico whether such a debate would take place in the future, Trump responded, “Perhaps that will come,” but stressed it was “not for now.”

“Look we have a tragedy. What happened in Las Vegas is in many ways a miracle. The police department has done such an incredible job. We’ll be talking about gun laws as time goes by,” Trump said.

The massacre in Las Vegas, the deadliest mass shooting in modern US history, has once again thrust the bitter debate over gun control back to the center of politics in Washington.

Gun control activists and some congressional Democrats say now is the time to discuss restrictions on firearms such as semi-automatic rifles as well as high-capacity magazines.

Police found a total of 42 guns in the hotel room and house of 64-year-old Stephen Paddock, who rained down a barrage of bullets from the 32nd floor of the Mandalay Bay Hotel towards an open-air concert Sunday night.

At least one of the rifles found in the hotel suite was outfitted with a “bump stock,” a legal attachment that allows a semi-automatic weapon to fire at the same rate as a fully automatic firearm.

Democratic leaders on Capitol Hill are focused on convincing Trump to break with his party and pressure Republicans to take action on gun control.

“None of this matters if we can’t get Republicans to do something,” one senior Democratic aide told The Hill.

Republicans, however, accuse their Democratic colleagues of politicizing a national tragedy with some conservatives warning that Trump would face a political disaster if he moved left on the issue.

Trump has been an outspoken ally to the gun lobby both as a candidate and president. In April, he told the National Rifle Association convention that they had a “true friend and champion in the White House.”

More than 100,000 people are shot each year in the US at a total cost of $45 billion, according to a study published in the journal Health Affairs hours after the shooting in Las Vegas.