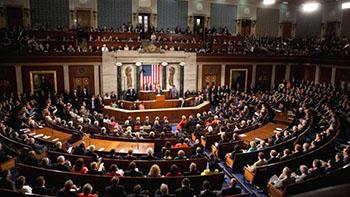 At least 180 members of the US Congress have called on President Donald Trump to endorse the Iran nuclear deal, saying an American withdrawal from the pact would be against the interests of the United States and its allies.

Led by Florida Representative Ted Deutch and North Carolina Representative David Price, about 180 House Democrats signed a letter to Trump on Wednesday urging him to recertify the nuclear deal, unless he can present “credible evidence of a material breach” of it by the Iranians.

The lawmakers wrote there has been no tangible evidence that Iran has violated any elements of the nuclear pact, officially known as the Joint Comprehensive Plan of Action (JCPOA), which puts some restrictions on Iran’s nuclear program in exchange for the removal of nuclear-related sanctions.

The letter comes just days before Trump has to report to Congress whether or not Iran is complying with the nuclear deal. If he argues that Iran is not in compliance, that could cause an American withdrawal from the international pact.

The International Atomic Energy Agency (IAEA) has recently reported that Iran is complying with the agreement.

In their letter to Trump, the lawmakers said that “absent credible and accurate information confirming a material breach, we are concerned that withholding certification of Iran’s compliance or walking away from the [nuclear deal] would harm our alliances, embolden Iran, and threaten US national security.”

They added that so far, no such evidence has been presented to Congress. They ended their letter by asking Trump to implement “vigorous enforcement” of the nuclear deal.

During a Senate hearing on Tuesday, US Defense Secretary James Mattis said Trump must consider remaining a party to the nuclear deal because the international accord serves US interests.

Last month, US Secretary of State Rex Tillerson admitted that Tehran was in “technical compliance” with the 2015 nuclear agreement.

The remarks by the Pentagon chief and the top US diplomat were in sharp contrast with Trump’s assessment that the nuclear agreement is an “embarrassment” to the US.

Trump has desperately sought a pretext to scrap or weaken the JCPOA, and get rid of the limits it imposes on the US ability to pursue more hostile policies against Iran.

The US Republican president faces an October 15 deadline for certifying that Iran is complying with the deal. Such certification is needed by US law every 90 days in order for Congress to continue to withhold nuclear-related sanctions against Iran, itself a US commitment under the JCPOA.

The Trump administration has twice so far certified Iran’s compliance with the deal, but if he refuses to do that for a third time, then the Republican-controlled Congress will have 60 days to decide whether to re-impose sanctions waived under the deal. That would allow Congress to effectively decide whether to kill the deal.

This is while the other parties to the deal, along with the entire international community, have thrown their weight behind the accord, praising the Islamic Republic for its full commitment to its side of the bargain.

According to reports, the British, French, German and European Union ambassadors to the US were to hold a meeting with Democratic senators on Capitol Hill on Wednesday night.

British Ambassador Kim Darroch was in Congress on Wednesday with his French, German and EU counterparts meeting with US lawmakers “to provide information on the European position on the JCPOA,” a British embassy official told Reuters.

The meeting is part of an ongoing effort by Democratic lawmakers and other officials to boost support for the deal.