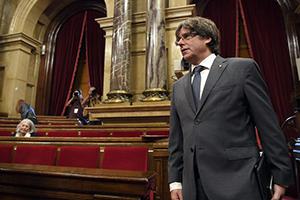 By Charles Penty and Esteban Duarte

Catalan President Carles Puigdemont kept the rest of Spain guessing on if and when he will declare independence, prolonging the uncertainty over the breakaway region’s ultimate card in its confrontation with the government in Madrid.

Speaking in a televised statement on Wednesday night, Puigdemont reiterated an offer for mediated talks while attacking King Felipe VI’s condemnation 24 hours earlier of Catalonia’s illegal referendum on Sunday. The regional government in Barcelona will soon apply the results of its makeshift vote, Puigdemont said, though he stopped short of saying how or when he would trigger the process to leave Spain.

“We will show our best face in coming days when our institutions apply the results of the referendum,” Puigdemont said, striking a less confrontational tone after a day of escalating rhetoric.

It buys some time in what’s already the biggest constitutional crisis since democracy was restored in Spain in the late 1970s. Catalonia accounts for a fifth of Spain’s economic output and support for independence had dipped during the country’s recovery since the European debt crisis.

The prospect of secession by the region is now piling pressure on Prime Minister Mariano Rajoy and his minority government and unnerving Spanish financial markets. The premier has been seeking cross-party political support for his hard-line approach after police stormed polling stations and triggered mass demonstrations. The next move could involve suspending the regional government and implementing direct rule from Madrid.

Puigdemont spoke in both Catalan and Spanish. He attacked Rajoy for what he labeled as disastrous policies and said repeatedly that the king had missed an opportunity and disappointed Catalans. The region, though, is simply doing what many others have done in their quests for more recognition and would still contribute to Spain, he said.

The Spanish government responded with a statement saying that if Puigdemont wants to negotiate, “he knows perfectly what he has do beforehand: return to the path of the law, that he should never have left.”

“The fact that he avoided mentioning the declaration of independence might be seen as striking a more conciliatory tone although I don’t think it materially changes the situation,” said Angel Talavera, an analyst at Oxford Economics in London. “Markets pick up on these small clues and maybe they’ll feel a bit more comfortable.”

The king caused outrage among many Catalans by vowing to keep Spain together in the face of the “unacceptable disloyalty” of the Catalan leaders. Then European Union officials sided with Madrid, with Frans Timmermans, first vice-president of the European Commission, saying it was the “duty for any government to uphold the rule of law, and this sometimes requires the proportionate use of force.”

Spanish bonds and shares in Catalan banks sank on concern about the standoff, while a Barcelona-based drugmaker said it was uprooting to Madrid as other companies started making contingency plans for a protracted political conflict. S&P Global Ratings put Catalonia’s debt on negative watch for a potential downgrade.

Yields on Spanish 10-year bonds rose in each of the past three days, rising to as much as 1.80 percent on Wednesday. The premium over similar maturity German bonds reached the widest in more than five months. Shares in Oryzon Genomics SA soared as much as 33 percent after the company announced it’s moving headquarters to Madrid. Catalan lender Banco Sabadell SA fell 5.7 percent.

“We continue in serious but stable condition,” said Pablo Simon, a political science professor at Carlos III University in Madrid. “The good news is that tension hasn’t increased further.”

That could change very soon.The parties holding the majority of seats in the regional parliament, Junts pel Si and CUP, asked Puigdemont to address lawmakers on Monday. That could start a 48-hour countdown to a formal declaration of independence. Parliamentary speaker Carme Forcadell said on Twitter that Puigdemont will explain the referendum result and its consequences at a session starting at 10 a.m.

Rajoy meanwhile is fighting to maintain control after Catalonia claimed 2.3 million voters defied both the central government and the Constitutional Court to cast ballots in the illegal referendum. Regional police ignored orders to shut down the vote on Sunday.

The National Court in Madrid started investigating possible sedition charges against the Catalan police chief and three leaders of the civic groups that helped organize the vote.

In July, before the situation spiraled out of control, only 35 percent of Catalans thought their region should be independent, according to a regional government poll. But many moderates have been incensed by the scenes of police beating voters with batons and firing rubber bullets into crowds of protesters.

“It’s clear to me that a point of no return has been reached and there’s no road back to how things were before,” said Caroline Gray, a lecturer in politics and Spanish at Aston University in the U.K.. “However things turn out, the relationship between Spain and Catalonia seems to have fundamentally changed.”