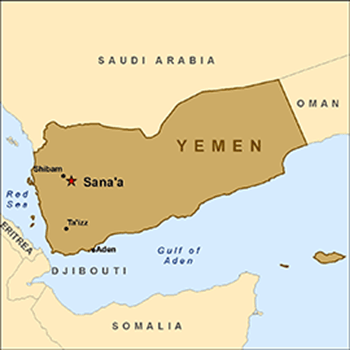 The bill introduced by a bipartisan group of House members last week to end the direct U.S. military role in the Saudi coalition war in Yemen guarantees that the House of Representatives will vote for the first time on the single most important element of U.S. involvement in the war — the refueling of Saudi coalition planes systematically bombing Yemeni civilian targets.

In doing so, moreover, the bipartisan bill, H. Con. Res. 81, will provide a major test of Congressional will to uphold the War Powers Act of 1973, which reasserted a Congressional role in restraining presidential power to enter into wars without its approval in the wake of the Vietnam War debacle.

Since the Obama administration gave the green light to the Saudi war of destruction in Yemen in March 2015, it has been widely recognized by both Congress and the news media that U.S. military personnel have been supplying the bombs used by Saudi coalition planes. But what has seldom been openly discussed is that the U.S. Air Force has been providing the mid-air refueling for every Saudi coalition bombing sortie in Yemen, without which the war would quickly grind to a halt.

The Obama administration, and especially the Pentagon and the U.S. military, became nervous about public statements about that direct U.S. military role in the Saudi war after some legal experts began to raise the issue internally of potential U.S. legal responsibility for apparent war crimes in Yemen.

Refueling Saudi coalition bombing missions “not only makes the U.S. a party to the Yemen conflict, but could also lead to U.S. personnel being found complicit in coalition war crimes,” Kristine Beckerle, Yemen and UAE researcher at Human Rights Watch, has observed.

The political sensitivity of that direct and vital U.S. military role in the Saudi coalition airstrikes was so great in the last year of the Obama administration that U.N. Ambassador Samantha Power, in an interview with a New Zealand journalist twice declared, deceptively, “We are not involved in carrying out airstrikes in Yemen.”

The bill introduced by Democratic Representatives Ro Khanna of California and Mark Pocan of Wisconsin, and Republican Representatives Thomas Massie of Kentucky and Walter Jones of North Carolina, calls for Congress to “direct” the President to “remove” U.S. military personnel from their role in the Saudi air war against the forces of the Houthi-Saleh alliance in Yemen. It would give the President 30 days in which to end the U.S. military role in support of the Saudi-led war in Yemen unless and until Congress has enacted either a declaration of war or an authorization of those activities.

The co-sponsors believe members will support it because U.S. direct involvement in the Saudi war of destruction in Yemen has enmeshed the United States in the world’s worst man-made humanitarian crisis in many years. Some 542,000 Yemenis, already weakened by starvation, have now succumbed to a cholera epidemic that is far worse than any in the world for the past 50 years, as the New York Times reported in August.

The starvation and cholera epidemic are the consequences of a multi-faceted strategy aimed at creating such civilian suffering as to finally break the resistance of the Houthi-Saleh forces. The Saudi strategy has included:

–Destruction of cranes necessary to offload any large-scale humanitarian assistance at the main port of Hodeida and refusal to replace them with new cranes.

–A naval blockade that has strictly limited shipping of food, fuel and other necessities to Hodeida port.

–Closing down the civilian airport to prevent delivery of humanitarian aid.

–Destruction of roads and bridges necessary for delivery of humanitarian aid.

–Closing down the Central Bank of Yemen – the only institution in Yemen that was providing liquidity to millions of Yemenis.

Another selling point for H. Con Res. 81 is that it is based explicitly on the language of the War Powers Act of 1973, passed by a two-thirds majority in the House overriding a veto by President Richard M. Nixon. The War Powers Act includes a provision that, “[A]t any time that United States Armed Forces are engaged in hostilities outside the territory of the United States, its possessions and territories without a declaration of war or specific statutory authorization, such forces shall be removed by the President if the Congress so directs by concurrent resolution.”

The proposed bill argues that the direct U.S. military involvement in the Saudi Yemen war has never been authorized by Congress, and that the provision in the wars powers act is therefore applicable. It specifically exempts U.S. forces operating in Yemen against Al Qaeda, which were authorized under the 2001 Authorization for Military Force (AUMF) and which have not generated critical public and Congressional reactions.

Con. Res. 81 applies a provision of the War Powers Act to ensure that opponents in the Foreign Affairs Committee or the majority leadership won’t be able to keep it bottled up without a vote. The War Powers Act puts any proposed Congressional resolution for action regarding an unauthorized use of force on a fast track for an early floor vote, making it a “priority resolution.” Once the measure is referred to the House or Senate foreign affairs committee, the War Powers Act requires that the committee report out a resolution within 15 days, and that the resolution must then come to a vote within three days.

Aides say the co-sponsors will present the measure as a response to a policy initiated and carried out for nearly two years by the Obama administration. They say a number of Republican offices are now seriously considering co-sponsorship of H. Con. Res. 81.

In addition to the humanitarian disaster and war powers issues linked to the direct U.S. military role in Saudi airstrikes, the co-sponsors will be pointing to multiple ways the U.S. role in the war makes the American people less secure, according to Congressional aides. One of the effects of the war has been to enormously strengthen the position of Al Qaeda in the Arabian Peninsula (AQAP), considered the biggest single foreign threat to carry out terrorist actions against the United States after two failed efforts in recent years. Saudi-backed Yemeni forces have been fighting alongside AQAP against the Houthis-Saleh forces. And the war has given AQAP much greater territorial control, political legitimacy and access to money and arms than it ever had before.

Yet another argument is the longer-term hatred of the United States that the U.S. direct involvement in the Saudi bombing campaign and starvation strategy is creating.

Lawrence Wilkerson, former Chief of Staff to Colin Powell, has been meeting with Republican House members to urge them to support the bill. “The war being waged in Saudi Arabia with U.S. assistance is brutal and vicious, and it is a losing one for both the U.S. and Saudi Arabia but a boon for AQAP,” Wilkerson said in an interview with TAC. “It should cease immediately.”

But sponsors and advocates of H. Con. Res. 81 may have to refute arguments about Iran that the Saudis and the Obama administration have used to justify the Saudi war in Yemen. Wilkerson noted Republican members who cited Iran’s alleged role in the Houthi war effort and the common U.S.-Saudi opposition to it.

“They argue that the Saudis are doing our work for us, so we’ve got to hold our nose and support them,” said Wilkerson.

But that argument reflects a false narrative created by the Obama administration that Iran has been arming the Houthis for years. Administration officials used a U.N. panel obviously set up at Washington’s behest to recycle old and demonstrably fabricated claims of Iranian arms shipments to the Houthis. The Houthis have undoubtedly obtained missiles and other weapons from Iran, but the U.N. panel of experts on Yemen reported in January 2017 that it did not have sufficient evidence to “confirm any direct large-scale supply of arms” from Iran to the Houthis.

More importantly, the modest military assistance from Iran came in response to the Saudi coalition air assault on Yemen — not the other way around. And contrary to the official Pentagon myth of a “proxy war” against Iran in Yemen, the Houthis are fighting the Saudis for Yemeni interests — not to serve Iranian interests.