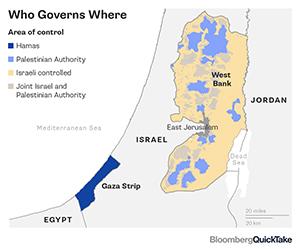 What is Hamas? One answer is clear: It’s the Islamist group that for 10 years has ruled the Gaza Strip, an impoverished sliver of Mediterranean coastline between Israel and Egypt that’s home to 1.9 million Palestinians. Beyond that, perceptions of the group differ. Some say it’s a terrorist group that poses a grave obstacle to peace between Israelis and Palestinians, a gang of thugs that seized the Gaza Strip at gunpoint. Others argue it’s a true representative of Palestinians, who were won over by its grassroots charitable work and the perception that it’s less corrupt than its rival, the Fatah party. Hamas is committed to Israel’s destruction, while Fatah, which for a decade has governed just in the West Bank, has been Israel’s partner in peace talks. In 2017 Hamas showed signs of softening, though not to the point of convincing its detractors that it had meaningfully changed.

In September, Hamas agreed to cede the governing of Gaza to the Palestinian Authority, which is charged with administering self-rule in the West Bank and Gaza under various agreements with Israel. The Authority is led by President Mahmoud Abbas of Fatah and a so-called unity government that Hamas had boycotted since 2015. Hamas’s concession came after Abbas imposed sanctions that cut civil servant pay and electricity in Gaza. Also, Qatar’s financial support for Hamas dried up after three of the country’s neighbors charged it with funding terrorism and cut off ties in June. Four months before the Gaza announcement, Hamas released a manifesto in which, for the first time, it accepted Fatah’s goal of establishing a Palestinian state in the West Bank and Gaza Strip. However, Hamas continues to refuse to recognize Israel next door and suggests such a state would be just an interim step toward taking over Israel as well. And it continues to embrace armed struggle. Since a 2014 Gaza-Israel war — which killed more than 2,100 Palestinians and 70 Israelis and caused mass destruction in Gaza —  attacks on Israeli targets have been less frequent. Groups more radical than Hamas are thought to be responsible for many of the rockets launched since then from Gaza into Israel. But because Hamas has controlled the territory, Israel nonetheless has held it accountable.

Hamas is a spinoff of Egypt’s Muslim Brotherhood, an Islamist religious, social and political movement. The organization was founded in 1987 amid the first Palestinian uprising against Israeli occupation and later gained notoriety for a campaign of suicide bombings and other attacks that killed hundreds of Israelis. It won popularity by establishing a network of charities that address poverty as well as health-care and educational needs. Its campaign against corruption in the Palestinian Authority led to its surprise victory in a 2006 election. The year before, Israeli forces had withdrawn from Gaza while maintaining control, with Egypt, over its borders and continuing to patrol in the West Bank, which is of greater strategic and religious importance to Israelis. In 2007, Hamas gained control over Gaza’s government in a bloody battle with Fatah. Abbas continued to serve as president of the Palestinian Authority, though his term officially expired in 2009. Since Hamas took over the Gaza Strip, it’s had four major confrontations with Israel. Along with financial support from Qatar, Hamas has received assistance from Iran.

Some commentators argue that a reconciliation between Fatah and Hamas would facilitate peacemaking with Israel. It could give Abbas an answer to Israeli complaints that negotiations are pointless because he can’t ensure that a treaty will hold in Gaza. On the other hand, the government of Israeli Prime Minister Benjamin Netanyahu, which dismissed the changes to the Hamas charter as meaningless, says it won’t deal with any Palestinian government that includes the group. Efforts to make unity governments work have failed repeatedly in the past. And the latest one was threatened by a disagreement over whether Hamas’s military wing would retain its weapons. The split among the leaders reflects a division in popular opinion. Many Palestinians think the group’s militancy may one day compel Israel to allow their people full independence. Others worry that Israel will never permit a Palestinian state in the face of that belligerence.