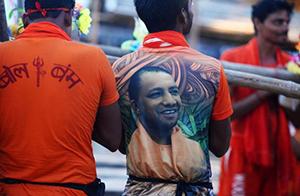 The government of the northern Indian state of Uttar Pradesh has been accused of carrying out hundreds of extra-judicial killings. Journalist Sharat Pradhan explores this extraordinary claim.

The regional government said it has conducted 433 “police encounters” in a bid to improve law and order in the state.

An encounter is a popular Indian term for fatal police shootings, most of which appear to be staged.

Rising crime rates in Uttar Pradesh convinced Chief Minister Yogi Adityanath to launch the crackdown, according to officials who spoke to the BBC on the condition of anonymity.

Official statistics say 433 such “killings” had occurred over six months, starting in March 2017 when Mr Adityananth was elected on the back of a massive mandate for India’s right-wing Bharatiya Janata Party (BJP).

A government press release described the “encounters” as an “achievement” and proof of “improvement in the law and order situation”.

With a population of more than 222 million, Uttar Pradesh is India’s most populous state and also its most significant politically – it sends 80 MPs to India’s parliament.

But it has often been in the news for gruesome violence, rioting and rape.

In the election run-up, the BJP had promised to curb crime in the state, which many acknowledge as one of its biggest problems. But this has only risen since the BJP came to power in 2014.

There was a marginal drop in murders, but incidents of rioting and robbery rose substantially. Major crimes, including those against Dalits (formerly untouchables) and women, also went up.

Officials told the BBC that this rattled Mr Adityanath enough that he was fumbling for a solution. He soon realised that platitudes would not improve the deteriorating state of law and order, they said.

While top officials were still thrashing out a strategy, Mr Adityanath himself thought of a solution that involved “encounters” because he was given to believe that they would lend much-needed credibility to his government.

Mr Adityanath, 45, is no stranger to controversy. A five-time MP and Hindu priest, he is considered to be one of India’s most divisive politicians. He has been widely condemned for his incendiary speeches against Muslims, especially during election rallies.

But concern over the recent increasing crime rate in Uttar Pradesh had also spread to Delhi, where the BJP-led federal government worried it would impact the party’s performance in the 2019 general election.

Top administrative and police officials contacted by the BBC wondered why the killings had failed to build the government’s credibility.

“Well, encounters only gave some brownie points to the cops, but failed to give any credible testimonial to the government,” observed a young police officer on the condition of anonymity. “In fact, encounters led to undermining the law of the land.”

When Mr Adityanath realised that his government would have to account for as many as 433 dead, officials said, the narrative changed to redefine the word, “encounter”.

They claimed that every instance of an “encounter” did not necessarily refer to a killing.

“The figure is also about police taking on outlaws so many times,” explained a senior police officer. “Only those who challenged the police or tried to run away after opening fire at the cops were gunned down.”

Image copyright Getty Images Image caption Crime is believed to be one of the biggest problems in Uttar Pradesh, India’s most populous state

They finally said that only 19 criminals were killed and 89 others were injured in “433 encounters” that took place across the state.

Official records say 98 officers were also wounded, and one killed.

Only time will tell if these official claims will help serve the Uttar Pradesh government’s objective of changing the perception of the prevailing state of law and order.