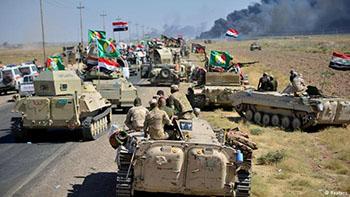 Iraqi forces have cleared out fighters from the “Islamic State” (IS) from their last stronghold in the country. IS now holds just a narrow slither in the country’s west.

US-backed Iraqi forces recaptured the town of Hawija on Thursday, forcing the “Islamic State” of their last stronghold.

The recapture now means that the only the IS territory in Iraq is a narrow strip along the Syrian border.

Troops, police and paramilitary forces “liberated the whole of the center of Hawija and are continuing their advance,” operation commander Lieutenant General Abdel Amir Yarallah said in a statement.

The offensive was led by Iraqi government troops and Iranian-trained and armed Shi’ite paramilitary groups known as Popular Mobilisation.

The United Nations estimated that 12,500 people had fled the town since the launch of the offensive last month. It said on Tuesday there could have been as many as 78,000 people left in the town.

Hawija, 230 kilometres (140 miles) north of Baghdad, had remained an insurgent bastion since soon after the US-led invasion of 2003. It was labeled “Kandahar in Iraq” for its similarities to the Taliban militia’s citadel in Afghanistan.

Journalists on the ground shared images of dozens of IS fighters surrendering.

Iraqi Prime Minister Haider al-Abadi was scheduled to meet with French President Emmanuel Macron in Paris later on Thursday to discuss the campaign against IS.