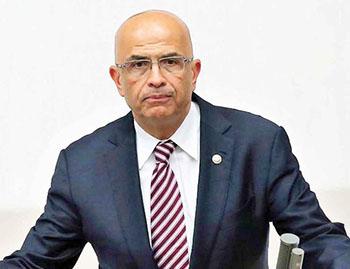 The lawyers of Enis Berberoğlu, a main opposition Republican People’s Party (CHP) deputy who has been in jail since June 14, have demanded the recusation of the judge in a closed hearing in Istanbul on Oct. 4.

Ergün said the victims in this case are actually both the Constitutional Court and Berberoğlu, as the top court had already delivered an opinion on the case, saying the news report for which Berberoğlu was jailed was not illegal.

Berberoğlu was sentenced to 25 years in jail by an Istanbul court on June 14 and immediately put in prison.

The court ruled that Berberoğlu, the first CHP lawmaker to be given prison time, had “knowingly helped a terror organization” by providing “state secrets” to the media when gendarmerie forces halted weapons-filled MİT trucks allegedly heading to Syria near the border on Jan. 19, 2014.

Erdem Gül, daily Cumhuriyet’s Ankara representative, Mustafa İlker Yücel, daily Aydınlık’s editor-in-chief, and journalists Orhan Ceyhun Bozkurt along with Berberoğlu appeared before a judge at Istanbul’s 14th Heavy Penal Court on Oct. 4 as Can Dündar, former editor-in-chief of Cumhuriyet who is also charged with espionage, did not appear.

The cases against the Aydınlık and Cumhuriyet staff, along with Berberoğlu’s case, were announced to be put under the same file by the court and the trial was postponed to Dec. 20 following the lawyers’ demand for recusation.

Spearheaded by CHP leader Kemal Kılıçdaroğlu, the main opposition party launched a “justice march” from Ankara to Istanbul after Berberoğlu was sentenced in June.

“Justice may be prevented, my acquittal may be postponed, and the torment I have faced may be prolonged, but in no circumstances can I be a criminal or confessor, because there is no crime,” Berberoğlu had said in a written statement published by the CHP headquarters through his lawyers on Aug. 14.

His comments came after Erdoğan implied that an ongoing probe into the espionage and leaking of secret state documents to media outlets could even be extended to CHP leader Kılıçdaroğlu.