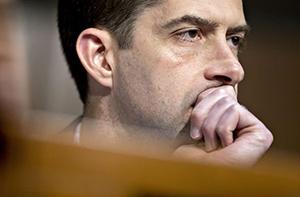 A key U.S. senator long opposed to the 2015 nuclear agreement with Iran offered a path for President Donald Trump to distance himself from the accord without immediately quitting it, imposing new sanctions or carrying out military action.

Arkansas Republican Tom Cotton, a member of the Armed Services Committee, said Trump should “decertify” Iran’s compliance with the agreement in a report required by Congress every 90 days and next due on Oct. 15. That, Cotton said, would let Congress develop a list of demands that the president could press European allies who are part of the accord — and oppose abandoning it — to accept.

While Cotton’s remarks bristled with hawkish threats of potential military action against Iran, the senator — who’s close to Trump’s national security advisers — delivered a message that was moderate in one respect: That Congress wouldn’t move immediately to reimpose sanctions that were eased as part of the nuclear accord.

“The Congress and president should lay out how the deal should change and the consequences for Iran,” Cotton said Tuesday evening in Washington at an event hosted by the Council on Foreign Relations. “The world needs to know we are serious, we are willing to walk away, we are willing to impose sanctions and a lot more than that. And they’ll know that when the president declines to certify the deal, and not before.”

The two-year-old accord lifted a range of international sanctions on Iran in exchange for curbs on its nuclear program. Cotton and other critics say it fails to take into account the threat posed by Iran’s ballistic missile program and by its efforts in countries like Syria, Iraq and Yemen to support leaders or groups opposed to the U.S. and its allies.

Trump campaigned against the agreement reached by his predecessor, Barack Obama, and has signaled increasing frustration after twice this year certifying Iran’s compliance with the accord in earlier reports to Congress. He told the Wall Street Journal in July that he expected to find Iran not in compliance this month, and his aides have since sought to explain what the consequences of that could be.

“No one has yet explained the tactical advantage of this move, no one has made a credible case,” Suzanne Maloney, a senior fellow at the Brookings Institution in Washington, said in an interview. “This will hurt our relations with our allies, it will provoke Iran to take more aggressive action and it’s all designed to assuage the president’s ego.”

Maloney said Trump could “embark on a more aggressive strategy” to confront Iran in Syria, Iraq and Lebanon, without undermining the nuclear deal.

Representatives Ted Deutch and David Price sent Trump a letter Wednesday they said was signed by more than 180 House Democrats urging him not to decertify Iran because “enforcing this agreement to the fullest extent will provide the United States with more leverage to stop a potential Iranian nuclear weapons program and push back on Iran’s destabilizing activities.”

United Nations Secretary-General Antonio Guterres also added his voice to those urging Trump not to scuttle the accord. The agreement “was a very important breakthrough from the point of view of global peace and security,” he told reporters in New York on Wednesday.

Cotton’s comments came as Trump and his national security team seem divided on the value of the accord that six world powers reached with Iran. Defense Secretary Jim Mattis told a Senate committee Tuesday that it’s in the U.S.’s strategic interest to remain in the nuclear deal, even though Trump called the agreement an “embarrassment” to the U.S. during a speech at the UN last month.

Asked at a House hearing later Tuesday if Iran is complying with the accord, Mattis said “I believe that they fundamentally are.” But he added that informing Congress the Islamic Republic isn’t living up to its broader responsibilities would be “distinct” from quitting the international accord.

Cotton, too, stressed that decertifying Iran isn’t necessarily the same as leaving the deal. He said Congress would act after Trump’s decision to lay out key requirements of a revised Iran agreement, including:

“Their missile program alone warns us that they continue to seek nuclear weapons,” Cotton said.

Citing Israeli Prime Minister Benjamin Netanyahu’s comments about the accord, Cotton said the U.S. should “fix it or nix it.” But European allies have pushed back at the Trump administration’s criticisms of the agreement. U.K. Foreign Minister Boris Johnson, standing alongside U.S. Secretary of State Rex Tillerson last month, said “it’s important that we make it work and that we keep it alive.” Tillerson said that, in his view, Iran was “clearly in default.”

Cotton said that while he’d be willing to give diplomacy time to work, economic sanctions and military action remain options.

Cotton went on to say he thought the U.S. could “contain” any retaliatory behavior from Iran over nuclear strikes, such as the increased transfer of weapons to militant groups in the Middle East or activation of terrorist cells.

“Better to have no deal at all than one that compromises our security, emboldens Iran and encourages nuclear proliferation across the Middle East,” Cotton said.

— With assistance by Anthony Capaccio, and Jennifer Jacobs