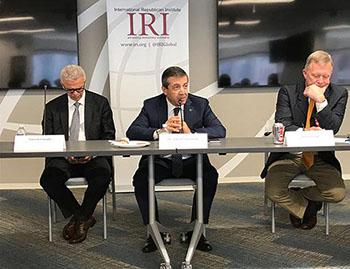 A “Monaco-like” autonomous system, dependent on Ankara in defense and international issues, could be an option for the Turkish side of the divided island of Cyprus, Turkish Cypriot Foreign Minister Tahsin Ertuğruloğlu said in a round-table meeting in Washington on Oct. 3.

“Defense and foreign affairs might be given to Turkey and for the rest the republic rules on the island. Like Monaco with France or Gibraltar with the U.K.,” Ertuğruloğlu said at the International Republican Institute (IRI) meeting.

This is not a preference but simply an alternative for the Turkish Cypriots if an international recognition bid seems unlikely to be realized, he stated.

The idea of a federal Cyprus has died and a confederation is at best what seems possible, the minister added, voicing frustration over the collapse of peace talks over the summer.

Addressing the Greek Cyprus’ unilateral activities for exploration and drilling hydro carbon reserves in the Mediterranean off the island, Ertuğruloğlu vowed that Turkish Cyprus would “shoot those ships if necessary.”

“We will make sure that they will not be able to go ahead … Foreign companies must also realize that the Greek Cypriots will not be able to do it. The Turkish Cypriots also must have a say in the explorations, as far as what kind of partnerships are to be established in order to do the drilling,” he said.

Ankara reacted strongly to the Greek searches in July, saying it is determined “to protect both its own rights and interests in its continental shelf and to continue supporting the Turkish Cypriot side.”

“We are prepared for various different scenarios,” Lakkotrypis told a state-run radio.
Meanwhile, Ertuğruloğlu also suggested that the United Nations Peacekeeping Force in Cyprus (UNFICYP) should act as a “humanitarian agency, but not a military unit.”

Of the U.N. aid convoyed to the Maronites living in Turkish Cyprus, Ertuğruloğlu said they will intervene in the process because the border crossing between Greek and Turkish Cyprus have been permitted since 2003 and the aid is no longer necessary.

“The current situation gives the impression that they [Maronites] are enclaved – that they are prisoners – which is not true,” he added.