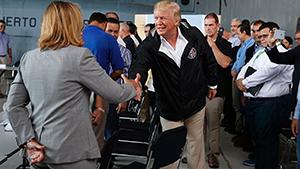 President Donald Trump surpassed Pope Francis to become the most followed world air on Twitter, reaching the rarefied air of around 40 million followers. The pope’s followers, in all languages, are slightly fewer.

Public relations firm Burson-Marsteller’s latest “Twiplomacy” studyshows that Trump, with his @realdonaldtrump handle, took the top spot over the weekend from the Pope, who tweets in English from the @Pontifex account and in Spanish from @Pontifex_es. The pope also has Twitter accounts in Italian, Arabic, Polish, French, German, Portuguese and Latin.

The study tracks about 890 accounts of world leaders such as heads of state.

It is not known when the study was conducted and Burson-Marsteller did not immediately respond to a request for comment from Fox News.

Former President Barack Obama has 95.6 million followers and has gained several million since leaving the Oval Office in Janaury 2017.

On Wednesday, Trump blasted sections of the media, specifically an NBC news report about a supposed rift between the President and Secretary of State Rex Tillerson, which he described as “fake news.”

NBC news is #FakeNews and more dishonest than even CNN. They are a disgrace to good reporting. No wonder their news ratings are way down!

The @NBCNews story has just been totally refuted by Sec. Tillerson and @VP Pence. It is #FakeNews. They should issue an apology to AMERICA!

Trump also tweeted about his visit to the victims of the Las Vegas massacre, which has left 59 people dead and over 500 injured.

I will be landing in Las Vegas shortly to pay my respects with @FLOTUS Melania. Everyone remains in our thoughts and prayers.

The Associated Press and Fox News’ Brooke Singman contributed to this report.