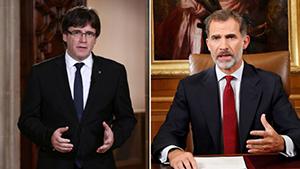 In a TV address, Mr Puigdemont accused the king of adopting the Spanish government’s position.

“This moment calls for mediation,” he said. He has indicated that Catalonia could declare independence next week.

Twenty-four hours later, Mr Puigdemont claimed that the king had rejected a moderating role granted to him by the Spanish constitution.

In response, the Spanish government in Madrid said it would not accept “blackmail” from the Catalan leader.

Mr Puigdemont must return to the path of law before any negotiation could take place, it said said in a statement (in Spanish).

His criticism of the king showed that he was “out of touch with reality,” it added.

Mr Puigdemont told the BBC on Tuesday that he would declare independence “at the end of this week or the beginning of next”.

The Catalan government has said there will be an extraordinary meeting of parliament on Monday to discuss the outcome of the disputed referendum.

While Catalan officials put the vote in support of independence at nearly 90%, final results have not yet been released. The turnout has been estimated as 42%.

In his statement on Wednesday evening, Mr Puigdemont did not give any further details of a possible declaration of independence.

Switching to Spanish from Catalan, he thanked Spanish citizens who had sent their “solidarity” to Catalonia.

Nearly 900 people were hurt as police violently tried to enforce a Spanish court order suspending the vote, which the government had declared illegal.

Some police officers were seen firing rubber bullets, storming into polling stations and pulling women by their hair.

Shocked by what they had seen, hundreds of thousands of Catalans joined street protests on Tuesday. A general strike was also called in protest at “the grave violation of rights and freedoms” seen during the ballot.

It was a rare public attack on the Spanish monarch but King Felipe himself, symbol of national unity, seldom addresses the country on TV, and President Puigdemont had to respond.

At a bar in the Catalan leader’s home region, they clapped respectfully afterwards, happy with their leader and his call for mediation, and then they joked about the Game of Thrones TV series.

“We need a king like Jon Snow who tries to keep his lands together and is with the people,” said one woman, laughing.

“I want a Spain that cares for all its cultures,” she added more seriously. “Why not love them all? We don’t understand the speech of Felipe VI.”