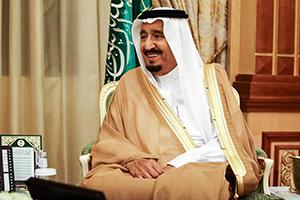 By Henry Meyer and Stephen Bierman

King Salman bin Abdulaziz, Saudi Arabia’s king, looks on during his meeting with U.K. Prime Minister Theresa May at Al-Yamamah Palace in Riyadh, Saudi Arabia, on Wednesday, April 5, 2017. May plans to help Saudi Arabia lower its dependency on oil exports and increase the participation of women in the workforce as the Gulf kingdom seeks to modernize its economy.

Saudi King Salman bin Abdulaziz is beginning an historic first visit to Russia by a monarch of the Gulf kingdom as he seeks an understanding with President Vladimir Putin to extend an agreement curbing oil supplies.

King Salman is due to meet with Putin on Thursday after he arrived for the four-day official visit late Wednesday. His journey to Moscow, ahead of planned talks with U.S. President Donald Trump in Washington early next year, underscores a shift in strategic direction by Saudi Arabia as Russian influence in the Middle East expands following Putin’s military intervention in Syria.

“We are sure that this truly epochal event in our relations will bring our cooperation to a totally new level,” Russian Foreign Minister Sergei Lavrov said in an interview with Saudi-owned newspaper Sharq al-Awsat published on the Foreign Ministry’s website on Wednesday.

The Saudi courtship of Russia reflects a convergence of interests between the world’s two largest oil exporters as the output pact between the Organization of Petroleum Exporting Countries and non-OPEC producers has spurred a recovery in crude prices. It’s also a recognition by Riyadh of the changing political balance in the Middle East after Putin successfully countered indecisive U.S. efforts to topple Syrian leader Bashar al-Assad.

“Saudi Arabia always liked to diversify” its relationships and “not to rely on one ally at a time, especially since America has proved time and again that they are not reliable allies,” said Khaled Batarfi, a professor at Alfaisal University’s branch in Jeddah, Saudi Arabia.

“Is there really anything in the world that’s absolutely permanent?” Putin told an energy forum in Moscow on Wednesday, in response to a question about whether Saudi Arabia will always align with the U.S. in geopolitical issues. “It seems to me, on the contrary, that everything’s changing.”

Putin said Wednesday that Russia may agree to extend the oil-supply agreement with OPEC to the end of 2018, though he’ll wait to make a decision until nearer the expiry of the existing pact in March. The arrangement that took effect in January benefits oil consumers as well as producers because it guarantees a “stable market,” he said.

Novak told Al Arabiya that he sees oil prices at $50-$60 per barrel in the short-term, which he described as “appropriate.”

The head of Russia’s state-run oil giant Rosneft, Igor Sechin, said last month that there’ll be pressure for OPEC and its partners to extend production cuts if Saudi Arabia proceeds with an initial public offering of a stake in state-owned Saudi Arabian Oil Co. About 5 percent of Saudi Aramco, as it’s known, will be offered in an IPO next year that could value the company at more than $1 trillion, depending on the state of the oil market.

“The Saudis will be looking for a solid commitment from President Putin to stick with the production deal with OPEC,” said Chris Weafer, a partner at Macro Advisory in Moscow. “That is Riyadh’s best hope for keeping the price of Brent in the mid $50’s, if not getting it above $60 in time to support the kingdom’s ambitious valuation target for Aramco.”

The Russian Direct Investment Fund and Saudi Aramco intend to announce a $1 billion fund to invest in oil-services projects in Russia on Thursday, RDIF Chief Executive Officer Kirill Dmitriev told reporters. The RDIF and Saudi partners plan more than $2 billion of investment deals during the king’s visit, he said.

The unlikely partnership between Moscow and Riyadh marks a sharp turn-around from Soviet times. Saudi Arabia cut off relations with the atheist Communist state in 1938, only restoring them after the Soviet collapse. Together with the CIA, the Saudis also armed Mujahedeen fighters who ended the Soviet Red Army’s 10-year occupation of Afghanistan.

Still, tensions remain over Syria, where Saudi Arabia is pressing Russia to rein in Iran, which the kingdom regards as its chief rival in the region, following the defeat of rebels backed by Riyadh in the war against Assad.

King Salman “won’t demand the impossible” at his meeting with Putin, said Irina Suponina, a Middle East expert at the Russian Institute of Strategic Studies, which advises the Kremlin. “Saudi Arabia is aiming for real cooperation with Russia and understands that you can’t split Russia from Iran.”