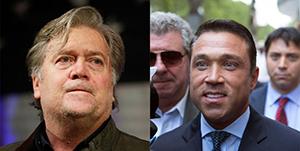 Former White House senior adviser and conservative firebrand Steve Bannon may once again shakeup the Republican Party by supporting and functioning as an outside adviser for a controversial candidate to defeat an establishment Republican congressman in a district that covers the New York City borough of Staten Island, FOX Business has learned.

Bannon met Wednesday in Washington, D.C., with former Rep. Michael Grimm, a Republican who held the New York’s 11 congressional district seat that covers most of Staten Island until 2015, when he was sentenced to seven months in federal prison on tax evasion charges. Grimm was eventually replaced by Republican Rep. Dan Donovan, who Grimm announced he will challenge in the district’s 2018 GOP primary.

In meeting with Bannon, Grimm is seeking high-profile support from one of the most important emerging power brokers in the Republican Party. Bannon, who represents the populist wing in the GOP, recently helped Judge Roy Moore defeat an establishment candidate Luther Strange in the Republican primary for the U.S. Senate seat in Alabama vacated by Jeff Sessions before he became President Donald Trump’s attorney general.

Ironically, in supporting and advising Moore, Bannon also defeated his old boss, the president, who campaigned for Strange before the primary. It’s unclear where Trump comes out in the Grimm-Donovan run off; a White House spokesman didn’t return calls for comment.

The meeting between Grimm and Bannon took place at Bannon’s offices at the so-called Breitbart Embassy, the Washington, D.C. headquarters of the conservative media outfit, Breitbart News, according to Michael Caputo, Grimm’s campaign adviser and a former communications adviser to Trump during the 2016 election, who was also present. Also at the meeting was Chris Grant of Big Dog Strategies, a D.C. communications consulting firm, who intends to be general consultant to the campaign, Caputo said.

“We spent the afternoon at the Breitbart Embassy strategizing with Steve and his team outlining how we will work together on this race,” Caputo told FOX Business in a text message. “We talked to him about fundraising, wedge issues, campaign strategy and how we will win the race and unseat a key anti-Trump Republican in the House,” he added.

While Bannon will not officially be part of the campaign, he’s looking to play a similar role as when he was involved with Moore’s primary run. According to a source close to Bannon, who spoke on the condition of anonymity, the former White House official will be lending outside support by giving advice on messaging and strategy.

A spokesman for Bannon declined to comment but did not deny he could serve as an outside adviser for Grimm.

Grimm was once a rising star in the Republican Party, being elected in 2010 on the anti-establishment Tea Party wave that helped the GOP win the House of Representatives during then-President Obama’s first term. But in 2014 he was charged with 20 counts of fraud, federal tax evasion and perjury, and later that year he pleaded guilty to a single count of tax fraud which forced him to resign from Congress in December of that year.

Even with his legal baggage Grimm won re-election in 2015 before giving up the seat to go to jail. Donovan won a special election that year, and was re-elected in 2016.

Bannon was the brainchild of Trump’s successful “America First” campaign strategy that stressed nationalism in matters of economics, trade and immigration. He was ousted from the Trump White House in August, after a broad shakeup in senior personnel following the appointment of new chief of staff, Gen. John Kelly.

Still Bannon remains close to the president, people familiar with the matter tell FOX Business. Despite supporting different candidates in the Alabama race, Bannon continues to consult with Trump on policy matters even as the president has surrounded himself with advisers, like Kelly, who are less nationalistic and more globalist in their politics.

Grimm, meanwhile, showed his support for Trump during his opening campaign rally this Sunday in Staten Island.

“I feel it’s my duty to protect our president’s back and to advance his agenda,” said Grimm, who took the stage to Toby Keith’s “Made in America” and declared of his Staten Island turf, “This is middle America.”

Donovan on the other hand has publicly shown mixed feelings about Trump. In April during a telephonic town hall Donovan explained to his supporters why the president should release his tax returns, dismissed Trump’s proposed budget cuts as misleading and assured that Planned Parenthood facilities in New York would not be defunded.

When one caller said she was worried about Trump’s proposal to cut funds for environmental protection efforts, Donovan explained  that “the budget that you’re speaking of now is just a proposed budget,” adding that “the proposed cuts that you see are not going to be the budget that we’re voting on.”

Caputo said Donovan’s efforts to undermine the president are the reason Grimm is making a move to unseat him.

“Donovan has worked against the president on ObamaCare, immigration, sanctuary cities and more—all issues on which N.Y.-11 stands firmly with the president,” Caputo said.

Grant declined to comment at the time of publication. A spokesperson for Donovan did not return calls for comment.