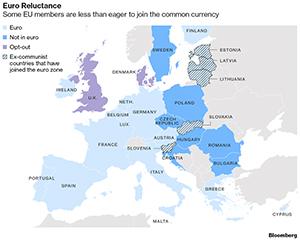 Hungary may adopt the euro sooner than its government is willing to admit, as Europe’s renewed integration drive will pull even countries reluctant to join into the common currency, the nation’s top banker said.

Leaders in Hungary, Poland, Romania and the Czech Republic — the four biggest economies in the European Union’s eastern wing — have refused to set target dates for adoption despite largely meeting accession criteria and being obliged to swap their currencies. While countries like Hungary won’t rush it, they also won’t want to be left out from deeper integration, said Sandor Csanyi, Hungary’s richest man and Chief Executive Officer of its largest lender OTP Bank.

“At the end of the day, Hungary will join the euro zone and we’ll go together,” with those pushing for deeper integration, Csanyi said in an interview last week in Budapest. “But I’m sure we’ll enter at the latest stage possible.”

That may not be far off. After holding the euro area together during Europe’s debt crises, closing ranks following Britain’s decision to leave the EU and keeping populists at bay in elections including in France and Germany, European officials started a debate over closer cooperation last week. French President Emmanuel Macron has said the discussions should include a common budget and single finance minister for the euro area.

That’s nudged some eastern EU members into action. Croatia, which joined four years ago, is aiming to enter the exchange-rate mechanism that’s a precursor to adoption by 2020 and officially join the euro a “couple of years later,” Prime Minister Andrej Plenkovic said last week. Bulgaria is also pushing for entry. Five of the EU’s 11 ex-communist members — Slovenia, Slovakia, Estonia, Latvia and Lithuania — have entered the currency area.

Other countries aren’t so eager for closer cooperation. Like Poland and the Czech Republic, Hungary has rejected a drive led by German Chancellor Angela Merkel to create a common EU immigration policy, and the governments in Budapest and Warsaw have clashed with officials in Brussels over upholding the EU’s democratic standards. All three countries are cool to the euro, citing wealth discrepancies with western Europe and the need to have independent monetary policies to help them handle external economic shocks.

Hungarian Economy Minister Mihaly Varga said last year the country of 10 million could adopt the euro by the end of the decade if it made progress closing the living-standard gap with western Europe. But he backed away from that stance in June and said the country had to close in on the euro-area average, from about two-thirds of that level now.

“Euro adoption will be timely once Hungary’s economic development nears the euro area average,” the ministry said in a response to emailed questions on Wednesday. “Otherwise the country could lose out with accession just like some of the Mediterranean countries did.”

In 2011, Prime Minister Viktor Orban also enshrined the forint in Hungary’s constitution, meaning lawmakers would have to approve an amendment with a two-thirds majority to make a switch.

Csanyi, who ranked second to Orban as Hungary’s most influential person in a poll by the napi.hu news website, said concerns over sovereignty would fall to the wayside if euro area countries push on with integration, the only viable way ahead for the EU.

“No country will be forced to give up 100 percent of its sovereignty,” Csanyi said.

— With assistance by Samuel Dodge