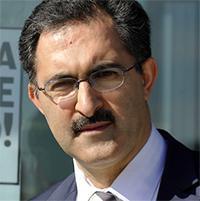 Even if we are to believe the truth of stories that totally absurd and ridiculous terrorism, espionage and coup plotting charges are levelled by the Turkish government against tens of thousands of innocent people in Turkey, that would not change the fact that almost all these criminal cases will have to be tossed out on procedural grounds.

The reason for this is crystal clear. Before even bothering to challenge the controversial evidence that lacks substance and merit in these witch-hunt cases, one has to show that the codes on criminal procedure are fully complied with, which is not the case. Therefore, I am absolutely sure that Turkey would be found in violation of the rights to a fair trial and due process, which are guaranteed under major international human rights conventions to which Turkey is a party.

In other words, the current government of President Recep Tayyip Erdoğan has not only failed to make the case in world opinion for his unwarranted persecution on substantive grounds, meaning that it did not present any convincing evidence that the regime’s brutal measures are required, proportionate and necessary, but also opens his administration up to serious legal, diplomatic and political repercussions on the breach of procedural laws.

There is certainly no shortage of procedural violations in prosecuting criminal cases in today’s Turkey, ranging from denial of access to lawyers during detention to limiting rights to mount an effective defense in court proceedings. But there is one that stands out from the rest, which is denial or undue restriction of access to the investigation file and evidence for defendants in criminal cases, that results in deprivation of their right to challenge the allegations on procedure and substance. This would put Turkey in the red when it comes to complying with two important human rights texts: the articles of the European Convention on Human Rights (ECHR) and the International Covenant on Civil and Political Rights (ICCPR).

In fact, Turkey was already put on notice about gross violations of safeguards that are protected by the conventions and monitored by UN bodies as well as Council of Europe institutions. The recent decisions by the UN and CoE bodies set a precedent for us on how these recent legal cases launched by the Erdoğan regime to crack down on judges, teachers, academics, journalists, union members, NGO workers and others will utterly fail in passing the test set up by these important intergovernmental organizations. The total disregard of basic principles in criminal prosecutions shows that the government-instigated cases against these people, especially in the unprecedented crackdown on civic group the Gülen movement, whose participants were arrested en masse, are completely hollow and do not have a shred of credible evidence to warrant prosecution.

There were three landmark decisions made by the UN Human Rights Council’s Working Group on Arbitrary Detention (WGAD) against Turkey which clearly laid out how these witch-hunt cases that were prosecuted in Turkey violated ICCPR articles as well as the Universal Declaration of Human Rights. In an opinion adopted on April 19-28, 2017 in the case of 39-year-old Kürşat Çevik, a police officer who was suspended and later arrested on alleged links to the Gülen movement, the WGAD ruled that the deprivation of liberty for Çevik violated Article 9(2) of the ICCPR, which states that anyone who is arrested shall be informed of the reasons for arrest and promptly informed of any charges against him or her. He was kept in jail for over six months without any formal charges and was not informed of the accusations.

Çevik served as a UN police officer in Liberia from June 2006 to June 2007 and studied for Ph.D. at a British university from 2008 to 2013 on a Turkish government scholarship. He was suspended on July 16, 2016, detained on July 21 and arrested on July 29 on false charges. The indictment was filed on Jan. 30, 2017 and trial proceedings started on April 14. He has remained in pre-trial detention since July 2016 and was never brought before a judge when he periodically challenged the arbitrary detention rulings.

The UN body also noted that the Turkish government was in breach of Article 14 (3) (b) of the ICCPR (the denial of meaningful assistance by a lawyer) and principle 17.1 of the Body of Principles for the Protection of All Persons under Any Form of Detention or Imprisonment. It stressed that the restriction on the disclosure of information to Çevik in order to prepare his legal defense was not proportionate. It also rejected the government’s argument that the non-disclosure of the file to him or his lawyer protected the legitimate aim of national security.

The UN group further found the government’s pressure on the defendant’s lawyer violated the principle 9 of the UN Basic Principles and Guidelines on Remedies and Procedures on the Right of Anyone Deprived of their Liberty to Bring Proceedings Before a Court, which said legal counsel shall be able to carry out their functions effectively and independently, free from fear of reprisal, interference, intimidation, hindrance or harassment. As a result, the WGAD referred the case to the special rapporteur on the independence of judges and lawyers for further consideration. Moreover, according to the UN experts, Turkey was also in violation of Articles 9 and 10 of the Universal Declaration of Human Rights in this case.

In another opinion the WGAD adopted on April 19-28, 2017 in the case of Rebii Metin Görgeç, a 54-year-old businessman involved in travel industry, Turkey was again found in violation of similar provisions under Articles 9 and 14 of the ICCPR and Articles 9 and 10 of the Universal Declaration of Human Rights. In contrast to Çevik’s case, the WGAD also made a determination that the Turkish government breached Article 10 of the ICCPR (the right to be treated with humanity and respect during detention) and Article 11 of the Universal Declaration of Human Rights (presumption of innocence until proven guilty for a defendant in a trial that has all the guarantees necessary for his/her defense).

Görgeç was detained at his home along with his wife on Aug. 16, 2016 allegedly without the presentation of any detention order or search warrant. He was kept in an underground police detention facility in unsanitary conditions and denied access to a lawyer. The formal interrogation took place on Aug. 21 and the arraignment was held on Aug. 24, when he heard the accusations of alleged links to the Gülen movement. Görgeç and his lawyer were denied access to the evidence cited by the prosecutor. His assets were seized and companies were taken over by the government. His wife, later released, was asked for a bribe to secure her husband’s release before more charges mounted against him. Although he has been diagnosed with an aortic aneurysm, early-onset Alzheimer’s disease, early-onset diabetes and chronic Lyme disease, he was denied the necessary medication.

The Turkish government did not even bother responding to UN experts who sought the opinion of the government on Görgeç’s case. Only days after the deadline for the response had passed, the government requested an extension, which was denied. The WGAD also issued a third opinion on April 19-28, 2017 with regard to the detention of 10 journalist and managers of the leftist Cumhuriyet daily [the defendants were listed as Akin Atalay (chief executive officer) Önder Çelik (executive board member), Turhan Günay (book supplement editor-in-chief), Mustafa Kemal Güngör (executive board member and attorney), Kadri Gürsel (journalist and board member of the International Press Institute [IPI]), Hakan Kara (columnist), Haci Musa Kart (cartoonist), Murat Sabuncu (editor-in-chief), Bülent Utku (executive board member) and Güray Tekin Öz (cartoonist)]. The UN body found violations of Articles 10, 11 and 19 of the Universal Declaration of Human Rights and of Articles 14, 15 and 19 of the ICCPR.

In contrast to other two cases, the WGAD made a determination in the Cumhuriyet case that Article 15 (1) of the ICCPR was also violated. The relevant article stipulates that “the prohibition of terrorist conduct must be framed in such a way that: (a) the law is adequately accessible so that the individual has a proper indication of how the law limits his or her conduct; and (b) the law is formulated with sufficient precision so that the individual can regulate his or her conduct.” It warned that the Turkish government might be abusing anti-terror laws “by using an extremely vague and broad definition of terrorism and charging the innocent and the suspect alike, victimizing the legitimate democratic opposition.

On the other hand, the ECtHR has not dealt with any cases originating from recent mass purges and arrests in Turkey and instead rejected them on the grounds that domestic remedies had not yet been exhausted. This is highly problematic in itself because there is no longer any effective domestic remedy left in Turkey including the Constitutional Court, which adjudicates individual complaints on rights violations. The ad-hoc commission on emergency rule that will review almost 150,000 cases of public employees who were summarily fired without any administrative or judicial probe was stillborn despite the CoE’s hopes pinned on the establishment of such a commission to review dismissals. Everybody knows that the judiciary is completely subordinated to the whims of President Erdoğan and that as such the ECtHR must urgently review these cases and issue pilot judgements to send a strong signal as to where Turkey ought to be heading in the rule of law rather waiting for the exhaustion of domestic remedies under extraordinary circumstances in Turkey.

Nevertheless, the case law of the ECtHR sheds light on how Turkey would be found guilty of procedural violations in all these politically charged cases we see in today’s Turkey. Defendants are often deprived of their right to appear before a judge to contest the detention orders and are denied unhindered access to investigation files and evidence. Article 6 of the ECHR, which ensures the right to a fair trial, and Article 5(4), which states that “everyone who is deprived of his liberty by arrest or detention shall be entitled to take proceedings by which the lawfulness of his detention shall be decided speedily by a court” are systematically and deliberately violated by the Erdoğan government.

Most recently, in the case of Hazni Bayram v. Turkey, the ECtHR ruled on July 18, 2017 that there had been a violation of Article 5(4) of the ECHR on account of the non-appearance before a court in the proceedings to challenge the lawfulness of continued detention. Bayram was placed in pretrial detention on Dec. 30, 2011 and did not appear before a judge for at least nine months, until Oct. 1, 2012, when the indictment was accepted by a court in Adana. The Strasbourg court emphasized that it had examined similar grievances in cases before and found the same violation under Article 5(4). Multiply Bayram’s case with the well over 50,000 cases of today and imagine how the ECtHR will be swamped unless it acts urgently to make clear where it stands on the mass arrests and dismissals.

With blatant disregard for the Code on Criminal Procedure, the Erdoğan government is shooting itself in the foot, undermining what is left of its credibility and exposing itself to worldwide condemnation from UN and CoE monitoring bodies. Flawed procedures coupled with a lack of substance in these tens of thousands of cases that have piled up in the last year alone will never deliver justice in Turkey no matter how much pressure the government puts on courts to wrap them up in record time. It was quite telling for Turkey when United Nations High Commissioner for Human Rights Zeid Ra’ad Al Hussein exposed the Erdoğan government’s hypocrisy on concerns about the human rights of the Rohingyas. “I encourage the (Turkish) Government to exercise the same consideration for the human rights situation within Turkey, which continues to deteriorate,” he said during a speech for the Human Rights Council sessions that started in Geneva on Sept. 11, 2017.