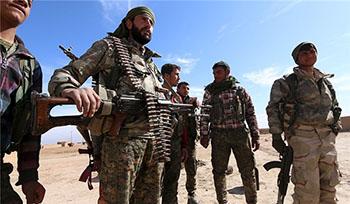 The Arabic-language al-Watan daily quoted Sheikh Mohammad Amlah al-Daham, the leader of al-Akidat tribe, as saying that the US and Kurdish forces entered talks with the ISIL to let them capture the town of al-Basireh following the Syrian Army troops’ advances towards the town of al-Mayadeen in Southeastern Deir Ezzur.

He told al-Watan that the Kurdish forces demanded the ISIL to retreat from al-Basireh region and join the Syrian Democratic Forces (SDF) in Hasaka province.

Al-Daham further told the paper that a large number of ISIL terrorists deployed in al-Basireh accepted the Kurd’s offer and joined the SDF, but, a number of them refused and stayed in the region to continue battle, pushing the initial agreement into failure.

Reports said earlier this month that almost 500 ISIL joined the Kurdish forces in the town of al-Shaddadi in Southern Hasaka.

Al-Daham said on Friday that almost 500 ISIL gunmen that had fled the battlefields joined the SDF in the town of al-Shaddadi in Southern Hasaka amid the Syrian Army troops’ rapid advances in Deir Ezzur.

Al-Daham said that the SDF in cooperation with Washington were to take control over Syria’s oil and other resources, adding, “We, Syrian tribe-men, do not believe in the SDF and the US as they just want to hoist SDF’s flag in the country.”