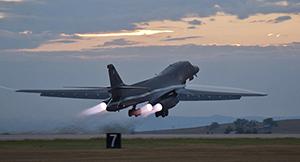 US Pacific Air Forces Gen. Terrence O’Shaughnessy maintains that US warplanes will continue to fly near the Korean Peninsula in accordance with international guidelines despite North Korean threats to take down US warplanes.

Pyongyang recently said it reserves the right to shoot at US aircraft in its airspace following a series of bellicose remarks by US President Donald Trump.

North Korean threats don’t seem to change the calculus of US missions close to North Korean airspace, at least according to the public statements of US commanders.

“We feel strongly we should be able to fly, sail anywhere international rules allow,” O’Shaughnessy said last Friday, adding, “we will continue to do so.”

When US Secretary of State Rex Tillerson confirmed to the New York Times over the weekend that backchannel communication lines had been established to discuss tensions with North Korean officials, Trump promptly shut down the notion that Washington would engage in even the most basic diplomatic talks with North Korea.

“I told Rex Tillerson, our wonderful Secretary of State, that he is wasting his time trying to negotiate with Little Rocket Man… Save your energy Rex, we’ll do what has to be done!” Trump tweeted October 2, adding that “Being nice to Rocket Man hasn’t worked in 25 years, why would it work now?”

According to “Provocative Behavior That Arouses Tens of Millions of People’s Will For Revenge,” an editorial published by North Korea’s state-run news agency Uriminzokkiri, “The US flying its B-1B Lancers strategic bomber squadron over international waters in the East Sea was an immensely dangerous and reckless act that intends to drive the situation on the Korean Peninsula to extremes and an anti-North Korea provocation cannot be overlooked.”

“Our military has been highly motivated with a resolve to shoot down the US flights seeking to trespass in our territorial skies,” the editorial said.