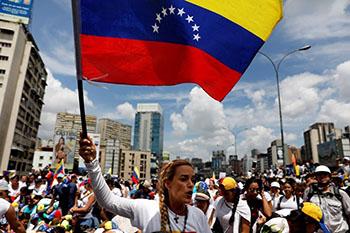 Years of failure have planted a deep sense of malaise among those seeking an end to the Maduro regime.

Lilian Tintori waves a flag during a women’s march to protest President Maduro’s government in Caracas, Venezuela, on May 6, 2017. Carlos Garcia Rawlins / Reuters

In delivering one of the most bellicose addresses ever heard at the United Nations General Assembly on September 19, President Donald Trump got at least one thing right: his description of Venezuela. The corrupt dictatorship of President Nicolás Maduro, he declared, “has brought a once thriving nation to the brink of total collapse … Maduro has defied his own people, stealing power from their elected representatives to preserve his disastrous rule. … The Venezuelan people are starving and their country is collapsing. Their democratic institutions are being destroyed.” Trump also said that “we cannot stand by and watch,” before calling for “the full restoration of democracy and political freedoms in Venezuela.”

Yet Trump offered no plan for action. A few weeks earlier, he had already imposed new sanctions on the country. In this, he was following the lead of Barack Obama, who had also called Venezuela a “national security threat” to the United States. Those in Venezuela actually working toward the “restoration of democracy” find themselves increasingly alone and beleaguered.

Evidence of this continues to arrive. On August 29th in Caracas, Venezuela’s CICPC (essentially, the federal investigative police’s forensic department) searched, without a warrant, an SUV belonging to Lilian Tintori, the wife of Leopoldo López, the country’s most popular opposition leader. (López is serving a 14-year sentence, now by house arrest, following a conviction on trumped-up charges relating to anti-government protests he helped conduct in 2014.) Since her husband’s imprisonment, Tintori has acted as his most prominent advocate, and is now a recognized, if unofficial, leader of the opposition. In her vehicle, the officers came across cardboard boxes containing 200 million bolivars in cash. Depending on the exchange rate applied, that amounts to between $9,000 and $61,000. The sum was bound to provoke controversy in a country where, thanks to a collapsing economy, a devaluing currency, and the highest inflation on earth (290 percent in 2016, according to the Johns Hopkins-Cato Institute’s Troubled Currencies Project), the average monthly salary now equals about $13 (at the black market rate). The government then announced it would be arraigning Tintori on unspecified charges and seized her passport, thereby blocking her imminent departure for Europe, where she was due to meet with the French, Spanish, and German heads of state on behalf of the opposition.

The police raid was par for the course for the opposition, which can’t seem to catch a break. López’s party, Voluntad Popular, apparently failed to win any primaries on September 10th ahead of December’s gubernatorial elections, but his media silence (a condition of his heavily monitored house arrest) during the campaign may have contributed to that. (While he was behind bars, Tintori smuggled his messages out to the public.) Since 2014, López has consistently ranked as the most popular opposition leader, with an approval score of 59.7 percent.  Maduro’s rating, in contrast, stands between 17 percent and 21 percent.

Given Maduro’s deep unpopularity and the widespread chaos, hunger, violence, and scarcity of basic goods under his rule, an obvious question arises: After three years of determined, ceaseless efforts, why has the opposition failed to unseat him? Partly because, a recent poll shows, a slight majority of the electorate remains either neutral (37 percent) or on his side (17.7 percent); he owes much to the Chavista government’s comprehensive welfare programs, which for more than a decade helped reduce extreme poverty and illiteracy in the country. The 42.9 percent opposing Maduro and turning out for the demonstrations are a vocal, and highly visible, minority.

The reason for the opposition’s minority status lies, then, in an incontrovertible, self-perpetuating fact: its high-profile failures have generated a pessimism among the public about its chances for success. The scandal involving Tintori’s cash was meant to play to a general cynicism about any hopes for change. Time and again, the opposition has faced dire challenges from the government, bravely confronted them, and failed.

Most recently, Maduro sidelined the National Assembly, controlled by the opposition as of December 2015, and pushed through reforms for a “constituent assembly” that would redraft Venezuela’s basic law—moves that almost nine out of ten Venezuelans rejected, and to which his own attorney general objected. (She has since fled to Colombia.) The opposition countered with a countrywide poll in mid-July, winning almost 7.2 million votes against Maduro’s plan. Two weeks later, the government claimed more than eight million voted in favor of the Assembly. Accusations of electoral fraud notwithstanding, the constituent assembly was passed into law.

Many other failures by the opposition preceded this last one. Perhaps the most significant occurred in 2013, when its leaders abandoned their challenge, on the basis of alleged fraud, to Maduro’s 1.5-point victory over Miranda state governor Henrique Capriles in that year’s presidential elections. Venezuela’s Supreme Court, stacked with Chávez appointees, rejected Capriles’s challenge. Years of foreign mediation in the opposition’s dialogue with the government have produced little except discontent among opposition members. Condemnation from Venezuela’s neighbors has had no effect on the Maduro government’s behavior.

Other factors weigh heavily against the opposition. The government’s hold on the distribution of scarce, mostly imported food supplies ensures that it can control, through its corrupt military and Comités Locales de Abastecimiento y Producción (Local Committees for Supply and Production) who is able to buy food at subsidized prices. Traditionally pro-government barrios of towns and cities get subsidized goods; others do not. (The Maduro government has refused to accept humanitarian aid from abroad, and may now be seizing for itself supplies imported by post.) Much-feared, heavily armed pro-government collectives attack demonstrators with impunity, and essentially govern the poorer barrios, where Chávez always could count on support.

Another circumstance is surely giving members of the Maduro government every incentive to cling to power: the ongoing U.S. Department of Justice investigations into and indictments of top former and current Venezuelan officials on charges of drug trafficking. Should Maduro and his entourage quit, they may well find themselves extradited to the United States to face trials and lengthy prison sentences. In fact, two of Maduro’s nephews are already doing time for attempting to import cocaine into the United States.

In a recent Skype conversation, I asked Tintori why the opposition could not manage to force the government to abandon its plan to replace the National Assembly with the constituent assembly. “The opposition did all it could. Deputies [of the National Assembly] defended their freedoms in the streets with their own bodies and many were wounded in the head, ending up hospitalized.” The Maduro government, she said, simply disregarded the demonstrations and ignored the opposition’s referendum on the constituent assembly, leaving the country stranded in “a limbo of dictatorship.” The opposition, she added, has called off protests, in view of December’s elections, and because “obviously people didn’t want to keep subjecting themselves to being killed.” 127 have been killed so far.

The opposition’s latest fiasco essentially leaves Venezuelans where they were before Maduro announced the constituent assembly: hungry, impoverished, and increasingly angry, as those who hope to bring them just governance pursue their goal peacefully.

So what’s next? Absent foreign military intervention (which Trump mooted, but the opposition and Tintori say they don’t want) and any success in the next round of Spanish-mediated dialogue between the opposition and the government, the Maduro regime will likely further entrench itself, transforming Venezuela into the Zimbabwe of Latin America.

Yet as Maduro and his cronies wreck Venezuela, the recent sanctions the Trump White House imposed have shut the country out of financial markets and may force it, by the year’s end, to default on its foreign debt. China and Russia have been propping up the Maduro government, and may see incentives—more Venezuelan oil for more financial aid—to continue doing so. Or they may abandon Maduro. A default could spark a humanitarian crisis that would dwarf the current one, and prompt a military coup by patriotic elements within the armed forces—those willing to overthrow (and possibly imprison) the high-ranking officers now in league with Maduro. What could then follow: free elections and the return of civilian rule, with exile or extradition for at least some of those in the military.

For now, though, times in Venezuela remain dark. Facing unspecified charges relating to the CICPC’s seizure of cash from her SUV, Tintori fears more than ever for the future. “I’m anguished,” she told me. “I’m being charged, but I don’t even know the charges. This dictatorship can come up with whatever they want to put me in prison.”  She paused. “My children have already spent three years without their father. I don’t want them now to be without their mother.”

The violent in Venezuela, at least for the time being, are bearing it away.