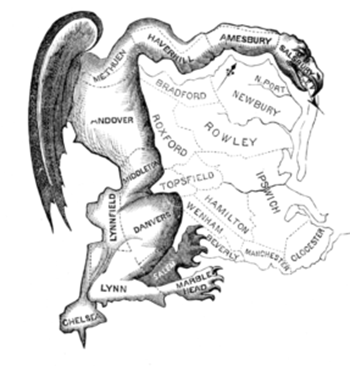 U.S. politicians often lecture other nations about their flawed governance as if American democracy is the gold standard, but anti-democratic measures like gerrymandering belie that self-image, says ex-CIA analyst Paul R. Pillar.

An old fear about Islamist political parties entering government is that once in power, even if they had gained their position through democratic means, they would subvert democracy for the sake of maintaining power.

The U.S. government explicitly mentioned the specter of “one man, one vote, one time” in condoning in 1992 the Algerian military’s cancellation of the second round of a legislative election that the Islamic Salvation Front, which had won a plurality in the first round, was poised to win. The military’s intervention touched off a vicious civil war in which hundreds of thousands of Algerians died.

History has indeed offered examples of rulers coming to power through democratic means and then clinging to power through undemocratic means. Adolf Hitler became chancellor of Germany only after his Nazi Party had won pluralities in two successive free elections in 1932. But there is no reason to associate such scenarios with Islamists more so than with parties of other ideological persuasions.

A relevant modern data point is Tunisia, the one Arab country in which democracy took hold as a result of the Arab Spring. The Islamist Ennahdha Party won a free election in 2011 and formed a government but willingly stepped down in 2014 after it lost much of its public support, very much in the mold of how governments in parliamentary democracies in the West vacate office after losing the public’s confidence.

The more common recent pattern regarding Islamists in office has been for their opponents to cut their tenures short through undemocratic means. This has included, besides Algeria in 1992, the Turkish military’s “coup by memorandum” to oust a mildly Islamist civilian government in 1997, and the Egyptian military’s coup in 2013 that toppled President Mohamed Morsi, a member of the Muslim Brotherhood.

Democracy in Turkey today is being rapidly eroded, but this involves not the ideological coloration of the Justice and Development Party but instead the megalomania of President Recep Tayyip Erdogan, who has been using Turkish nationalist themes more than Islamist ones in cementing his hold on power.

All this, important though it is, ought to be less important to Americans who are concerned about preserving democracy than what has been happening in their own country. The gerrymandering case that is before the Supreme Court this week is especially important in that respect, because it gets directly to the phenomenon of one person, one vote, one time.

That phenomenon is what has occurred in Wisconsin, where the case now before the court originated. Republican legislators, once in power, secretly and aggressively devised new legislative boundaries that have enabled them to retain their grip on power even after, in subsequent elections, losing majority support among the citizens of Wisconsin.

Given the power of those same legislators to draw Congressional districts as well as their own districts, the disconnect between the will of the people and the ideology of representatives extends to the federal as well as the state level.

The methods used may be different from those used by some of the foreign rulers who have transitioned from democratically elected leaders to autocrats using nondemocratic means. The prime method used in gerrymandering in the United States is not brown shirts in the streets but rather computing power used to crunch demographic data and to try out endless variations of how lines might be drawn to gain maximum partisan advantage. But the result is the same: rulers stay in power even after most citizens no longer want them there.

Gerrymandering is not the only such undemocratic tool being used to the same effect. There also are the Republican-sponsored voter suppression laws designed to impede people’s ability to exercise the right to vote, and to do so in ways that fall most heavily on those presumed to be more likely to support the opposition party. These methods are rationalized through unsupported assertions about widespread voter identification fraud. President Trump has even established a commission founded on such a lie, to provide momentum for still more voter suppression measures.

Excuses Not to Act

When any case such as the Wisconsin case comes before the Supreme Court, there always are voices calling for the court to defer to elected branches of the government on what is a “political” question. But such a position is groundless when gerrymandering is involved. The problem at the very heart of the case concerns the composition of the political branch that has been drawing district lines. For the court to defer to that political branch would mean not that it is avoiding a decision but rather that it is deciding in favor of the pro-gerrymandering side.

Of course, the politicization of the U.S. Supreme Court is a long-established feature of American government and politics. The effects of gerrymandering and the voter suppression laws have been amplified by supposed “strict constructionists” construing the First Amendment guarantee of free speech so loosely as to strike down laws governing campaign financing. Moreover, the composition of the court that is now deliberating on the gerrymandering case is itself the product of an extra-constitutional exercise of power by a Senate majority that refused to perform its constitutional duty of considering a nomination by the then-incumbent president.

The health or sickness of democracy overseas has been a major focus of U.S. foreign policy debate and much policymaking. Some strains of policy thinking have even led to costly overseas military expeditions rationalized as efforts to install democracy in lands overseas. Any Americans thinking along such lines should stop and think first about how democracy in the United States appears to observers overseas. It is not an especially pretty sight.

The United States today is a less healthy democracy than what prevails in many other advanced industrial countries of the West. There is a foreign policy equity involved — in terms of the soft power than comes from being a conspicuously healthy democracy— but what is most important is what kind of political system Americans themselves can enjoy.

Of all the advantages of democracy that democratic theorists have posited, surely the most important is the ability of citizens to remove leaders whom they no longer support. There is no better guarantee that government will be run in the interests of the governed.

The case now before the Supreme Court will go a long way toward determining whether U.S. democracy will exhibit this principle or instead will be a case of one person, one vote, one time.