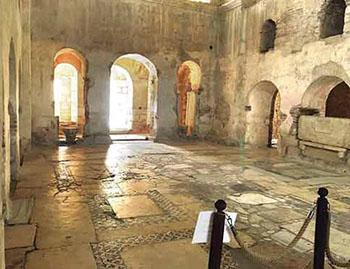 The tomb of Saint Nicholas may have been buried in the southern Turkish province of Antalya all along, Antalya Director of Surveying and Monuments Cemil Karabayram has claimed, after an intact temple has been discovered underneath the Saint Nicholas Church in the Demre district.

Karabayram said a special section was found in the temple during scientific and technological works, with speculations that the tomb may be buried there.

Speaking about the works that have been continuing for nearly three months in the church, Karabayram said: “The temple on the ground of the church is in good condition. We believe that it has received no damage so far. But it is hard to enter it because there are stones with motifs on the ground. These stones should be scaled one by one and then removed.”

Karabayram said there had been many comprehensive works related to the tomb of St. Nicholas. “We studied all of the documents from between 1942 and 1966. There were some notes there. According to these notes, this church was demolished and rebuilt. During the reconstruction, traders in Bari took the bones. But it is said that these bones did not belong to St. Nicholas but to another priest. One of those to have said this was Professor Yıldız Ötüken, an academic of Hacettepe University’s history of art department. She says that St Nicholas is kept in a special section,” he added.
Ötüken headed the archaeological excavations project in Demre for 20 years.

Eight academics to be appointed

“We have obtained very good results but real works start now. We will reach the ground and maybe we will find the untouched body of St. Nicholas. We appointed eight academics of different branches to work here. If our expectations are met, Demre will be at full capacity,” Karabayram said, suggesting that the new discovery may stir discussions at an international level.

He said they had a CT scan and geo-radar in the church, adding that now they will detail these works.

“The world’s eyes will be set on here. We claim that St. Nicholas has been kept in this temple without any damage. We are at the last stage. If we get the results, Antalya’s tourism will gain big momentum. We will start discussions at an international level after the excavations. The head of the excavations is Professor Sema Doğan and she is in shock, too. We have been working for three months and at the last stage, the excavation field will be extended. We cannot enter there right now because experts have to first work on the mosaics,” Karabayram said.