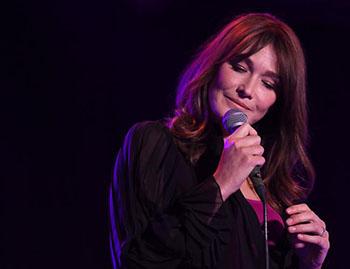 Carla Bruni will perform in Istanbul for the first time as a part of her “French Touch” album. Former First Lady of France will take the stage at Zorlu PSM on Dec. 13.

The multilingual pop star says she “intimately feels each language.” In her native Italian, she explains, reading a simple menu sounds like poetry but the words can be hard for non-natives to decipher.

French, her main professional language, is wonderful for writers but lacks tonality— “Rr! rr! rr! rr! rr! rr!” she explains for emphasis, exaggerating the Gallic uvulars. But English, in which the singer recorded her latest album, is the language of rock ‘n’ roll.

“It has a rhythm and it has a sort of tempo that Latin languages don’t have,” Bruni, beaming after morning stretch exercises, told AFP. “English is a natural singing language.”
“French Touch” consists entirely of covers. The original artists vary widely—Abba, AC/DC, The Clash and Lou Reed, among others—but Bruni transforms each into a loungy, retro style of pop standards with her breathy yet raspy voice.
It is Bruni’s second English album following 2006’s “No Promises,” in which she adapted poetry. Bruni composes music on guitar but says she doesn’t feel comfortable writing lyrics in English.

Bruni thought about hiring a co-writer and spoke with David Foster, the veteran musician who has worked with soft-rock wonders, such as Chicago and Celine Dion. But after hearing her covers, Foster signed on to produce a full album’s worth.

Bruni brings a light sensuality to Patsy Cline’s classic “Crazy,” with country legend Willie Nelson duetting for a more twangy chorus. And she sings Tammy Wynette’s “Stand By Your Man”—controversial on its release in 1968 for its message, at a time of cultural tumult, of marital fidelity. Lines include: “Be proud of him / because after all he’s just a man.”

Bruni in 2008 married France’s then President Nicolas Sarkozy and, shortly after leaving the Elysee Palace, caused a stir with remarks that appeared to criticize feminism.

The singer rejected criticism of “Stand By Your Man” and said she considered herself a feminist.

“It’s a simple song about a girl who’s in love,” she said. “If it was a man who wrote the song, it would be a little bit of a macho song, but it’s a woman, so it’s her choice. I thought it was very feminine, very classic. I’m very much a feminist, but I think that song is cool. I think you can be a feminist and stand by your man. I don’t see the contradiction,” said Bruni.