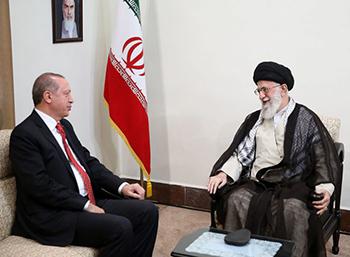 Turkish President Recep Tayyip Erdoğan has reacted to a statement made by Russian President Vladimir Putin on a decision to be made by neighboring countries concerning halting of oil exports from the Kurdistan Regional Government (KRG), saying not Putin but Turkey, Iraq and Iran would decide it, Hürriyet reported.

“A rise in the price of oil would be good for Russia. Mr. Putin doesn’t want oil prices to go up? He might have been joking. If a decision will be taken on it [cutting off exports], it will be taken by us. Turkey, Iran and the central Iraqi government, all together, we will decide it,” Erdoğan told journalists when returning from a visit to Tehran.

The Russian leader had said Moscow was against cutting the flow of oil from northern Iraq due to a possible upward trend in oil prices.

Ankara, Tehran and Baghdad have been weighing sanctions against the KRG, which held an independence referendum on Sept. 25 despite warnings from neighbors and the international community including the US.

Upon a question, Erdoğan said there has been no positive signal from the KRG up to now and no contact with KRG officials, either.

“Finally, [KRG President Massoud] Barzani and friends will give it up. In fact, there is no legitimacy to what they have done. It is against international law,” said Erdoğan.

“He has to cancel the results of the referendum,” Erdoğan said upon a question of what steps by Barzani would be welcomed by Ankara.

“There is no support for the KRG except by Israel. Hence, they have to give it up. If not, we will have to take some steps in accordance with a timetable.”

Erdoğan on Sept. 26 warned Barzani not to rely on Israel.

“Those who are provoking you today will leave you alone tomorrow, but we will continue to live together for thousands of years. Don’t destroy your tomorrow by your ambition today. The fact that Israeli flags are waving there will not save you, you should know that,” Erdoğan said.