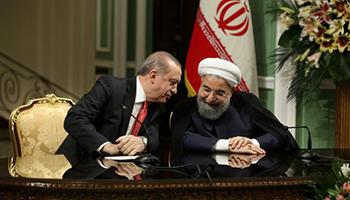 Turkish President Recep Tayyip Erdoğan on Thursday said Turkey, Iraq and Iran would soon close airspace and borders with the Kurdistan Regional Government (KRG) as a measure against an independence referendum held in the KRG on Sept. 25, the state-run Anadolu news agency reported.

“There is Iran on one side, in the north Turkey, in the south, the Iraqi government, in the west, Syria. What will you [KRG President Massoud Barzani] do? Where will you go? How will you exit? Now all airspace will be closed. Flights have already been halted, who will come? How will you go? Borders will also be closed soon. How will you enter and exit?” Erdoğan said while talking to a group of civil society representatives from Kurdish-populated southeastern Turkey at the presidential palace in Ankara.

“Who teaches you [Barzani] this? Only Israel is behind you. A former French foreign minister in on your right side, another Jew is on your left side, you work at the table with them. They are not your friends. They are with you today, but tomorrow not. You should look at us.”

Ankara, Tehran and Baghdad have been weighing sanctions against the KRG, which held an independence referendum on Sept. 25 despite warnings from neighbors and the international community including the US.

Upon a question, Erdoğan said there has been no positive signal from the KRG up to now and no contact with KRG officials, either.

“Finally, [KRG President Massoud] Barzani and friends will give it up. In fact, there is no legitimacy to what they have done. It is against international law,” said Erdoğan.

“He has to cancel the results of the referendum,” Erdoğan said upon a question of what steps by Barzani would be welcomed by Ankara.

“There is no support for the KRG except by Israel. Hence, they have to give it up. If not, we will have to take some steps in accordance with a timetable.”

Erdoğan on Sept. 26 warned Barzani not to rely on Israel.

“Those who are provoking you today will leave you alone tomorrow, but we will continue to live together for thousands of years. Don’t destroy your tomorrow by your ambition today. The fact that Israeli flags are waving there will not save you, you should know that,” Erdoğan said.