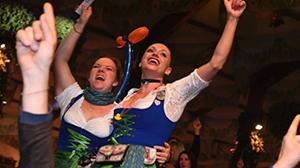 Berlin: Most Germans are wary of anything that smacks of nationalism given their Nazi history but the concept of “Heimat” (homeland) is enjoying a renaissance driven by rising anxiety about migration and globalisation.

President Frank-Walter Steinmeier used the resonant word 18 times in marking the 27th anniversary of German reunification on Tuesday, saying the nation needed honest dialogue about immigration after taking in over a million migrants since 2015.

Cem Ozdemir, head of the environmental Greens party, applauded Steinmeier for reclaiming the word from the far-right Alternative for Germany (AfD), which emphasised nationalist and anti-immigrant themes to capture around 13 per cent of the vote in the September 24 national election.

Germany’s post-war history included migration from Italy, Turkey, Greece and eastern Europe, but it has resisted thinking of itself as a country of immigrants. That is changing now amid calls for a proper immigration law to differentiate between political refugees and economic migrants.

Along with that has come new soul-searching about what it means to be German, as well as resurgent demand for dirndls (traditional Alpine dresses), cuckoo clocks, local foods and mystery novels set in regions like the northern island of Sylt.

Raed Saleh, a Berlin politician whose Palestinian parents moved to Germany from the Israeli-occupied West Bank when he was five, said he was reminded of his own identity struggles when he spoke at a high school in Berlin’s Wedding district – where 90 per cent of the students come from immigrant families.

“I saw really talented, engaged people and I want them – and all children in Germany – to feel that they belong here,” said Saleh. “I didn’t have that feeling myself for a long time.”

In his book, German Me: The New Guiding Culture published earlier this year, Saleh called for a more inclusive “common vision” for Germany and its 82 million people.

His book is one of over a dozen published over the past year that explore German identity and the concept of homeland.

Christian Schuele, whose book Heimat: A Phantom Pain was published this spring, says the trend and support for far-right parties is driven by a sense of loss of national identity as immigration has surged, especially for those whose towns have shrivelled and where local traditions have died out.

The current debate is long overdue, he says, noting the election revealed deep cracks in society caused by the lack of integration of many from the country’s formerly communist east, and others, such as those with backgrounds in Russia and Turkey.

“It’s definitely a topic that moves people,” said Bianca Kroemer, spokeswoman for Berlin’s Dussmann bookstore, which has a whole section focused on the issue.

“‘Heimat’ is in vogue,” agreed Juergen Kron, managing director of the Duesseldorf-based Droste Verlag, whose focus on regional titles had kept sales up despite the overall drop in the publishing market.

National pride became acceptable for the first time since the Nazi era during the summer of 2006, when Germans revelled in their World Cup victory by waving flags long associated only with the far-right.

In recent years, the “buy local” movement has fuelled interest in regional books of all kinds, Kron said.

Next week’s Frankfurt Book Fair will feature nearly a dozen events related to the subject of homeland.

Dorothea Suh, a 33-year-old music teacher in Hamburg whose parents came from South Korea two years before her birth, worries that the discussion about German identity comes too late and that other parties will ultimately co-opt the AfD’s agenda.

Stung by recent experiences – including a neighbour yelling “Foreigners out,” Suh is actively planning to emigrate.

“Germany is my home. I don’t want to leave, but I’m starting to feel like a stranger in my own country,” Suh said. “I don’t want to wait too long and then find myself facing closed doors.”